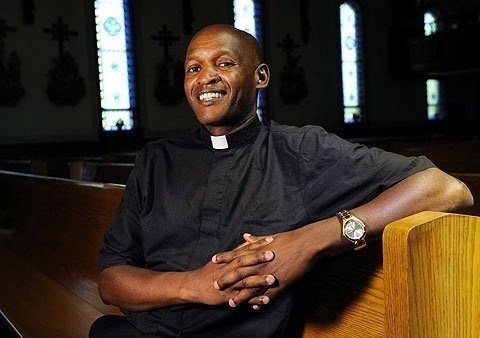 Father Augustine Chumo, a native of Kenya who currently serves as pastor of St. Joseph the Worker Parish in Wayne County, was incardinated as a diocesan priest May 1.

As a child growing up in Kenya, Augustine Chumo never imagined he’d one day be a priest serving overseas in the United States.

"Initially I didn’t ever think I was going to be a priest or anything," he recently told the Catholic Courier.

That’s just what happened, however, and on May 1 he officially became a priest of the Diocese of Rochester. Father Chumo has been ministering in the diocese since 2006 as an extern priest, or a priest of one diocese who is serving in a different diocese, but on May 1 he was incardinated into — or permanently attached to — the Rochester Diocese. Father Chumo said he’s excited about joining this diocese.

"I am also very thankful to Bishop (Matthew H.) Clark and the Diocese of Rochester for welcoming me into this diocese," said Father Chumo, pastor of St. Joseph the Worker Parish in Lyons, Clyde and Savannah.

Father Chumo, 48, formerly was a priest of the Diocese of Nakuru, Kenya, where he grew up. He began discerning his priestly vocation as a teenager, when he began to notice to presence of missionaries in the communities around him. He was impressed by their work and by the stories they told him about missionary life in such places as Sudan and Colombia. Shortly before his high-school graduation, he spent a month living with a missionary group and experiencing the missionary lifestyle firsthand.

"I kind of liked it, and after my graduation I wanted to join them," he said.

The teen’s pastor, however, discouraged him, so instead he completed two more years of schooling and spent several years teaching in local high schools. In 1990 a diocesan official who knew about his previous vocational leanings encouraged him to enter the seminary. He completed his theology and philosophy coursework in 1997 and was ordained a transitional deacon on May 14, 1997. He spent some time ministering as a deacon in a parish before he was ordained a priest on Nov. 14, 1998.

The young Father Chumo was assigned to St. John Parish in the Nakuru Diocese, and there he worked with the parish’s youths and small Christian communities. After that he moved into a diocesan position that allowed him to work with the youths of the whole diocese, as well as with those considering priestly vocations. He had been in that position for approximately seven years when his bishop asked him to consider studying in the United States. Father Chumo filled out the application paperwork, mailed it in and promptly forgot about it. Six months later he found out he’d been accepted and was headed for the United States.

"I came to the United States on Aug. 30, 2006, and was in Rochester the following day, Aug. 31," Father Chumo said. "I must say that I am most appreciative to Father Jim Lawlor, the staff and the faith community of St. Catherine’s Church in Mendon. They were my first hosts and were supportive in all ways."

Father Chumo lived at the Mendon parish for two years while he studied at St. John Fisher College in Pittsford. He later served at St. Joseph Parish in Rush and Good Shepherd Parish in Henrietta before becoming sacramental minister at three Wayne County parishes in June 2010. He served in that capacity at St. Michael Parish in Lyons, St. John the Evangelist Parish in Clyde and St. Patrick Parish in Savannah for a year before becoming pastor of those three parishes, which merged in March 2012 to form the new St. Joseph the Worker Parish.

"The area to be covered by a parish in the United States is much smaller than in Kenya," he explained. "In Kenya there would be about three or four priests, but the community would be bigger, (composed of) small communities scattered all over the place."

Parishes utilize small Christian communities to help close these gaps, said Father Chumo, noting that the Kenyan Catholic Church is young and growing, and it’s not unusual for people under the age of 35 to make up 60 percent of a given congregation. This typically is not the case in the more mature American Catholic Church, but Kenyan and American Catholics still have much in common, especially when it comes to their spirituality, he said.

"The Eucharist is the center of our Christian worship and other things turn towards that. That is what is happening everywhere," he said.

Father Chumo began thinking about becoming a permanent part of the Rochester Diocese a few years ago, in part because people kept telling him the need for priests was greater here than in Kenya.

"The ministry is very enriching to me, so I said why not go for it," he said, adding that he does not regret his decision. "People have been so kind, so very welcoming and supportive in all ways."