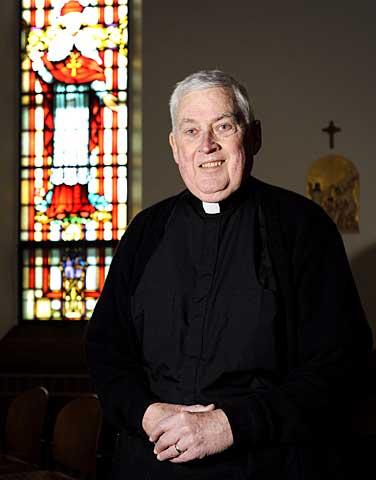 Father Michael Conboy said he feels blessed to have worked for two bishops at different periods in his 48 years as a priest.

Only seven years after his ordination in 1962, Father Conboy became secretary to Bishop Joseph L. Hogan, for whom he worked for the next 10 years. In 2000, Bishop Matthew H. Clark appointed Father Conboy as part-time director of the diocesan Department of Priest Personnel.

"It’s been a real privilege to work under two different bishops," he said during an interview April 15 at the diocesan Pastoral Center in Gates. He will retire June 30.

Father Conboy, 75, said he is also grateful for the well wishes and community support he received during a long illness he suffered this past winter.

An Auburn native, Father Conboy grew up in St. Mary Church. The parish has produced 36 priests and a great number of Sisters of St. Joseph — a testament to the priests and sisters who served as excellent role models there, he noted.

He attended St. Mary School and Holy Family High School in Auburn, and St. Andrew and St. Bernard’s seminaries in Rochester. He was ordained by Bishop James E. Kearney on June 2, 1962.

During his tenure with Bishop Hogan, Father Conboy also served as pro-synodal judge in 1975 and a diocesan consultor in 1977. He became pastor of St. Patrick Church in Seneca Falls in 1978 and St. Margaret Mary in 1984.

As a pastor, Father Conboy said he enjoyed being involved in the lives of his parishioners especially when they were in need of spiritual assistance.

"One of the experiences during my time (as pastor) was the implementation of the hopes and dreams of Vatican II," he said.

In 2005 Father Conboy became rector of Beckett Hall, the diocesan residential program for priesthood discernment, and is not yet sure where he’ll be assigned upon retiring. But he would still like to continue pastoral work as much as his health will allow, he added.

"I’ve been invited to consider a few different places," he said.

Father Conboy said he also enjoys cooking and gardening and may try to get back to those hobbies in retirement.