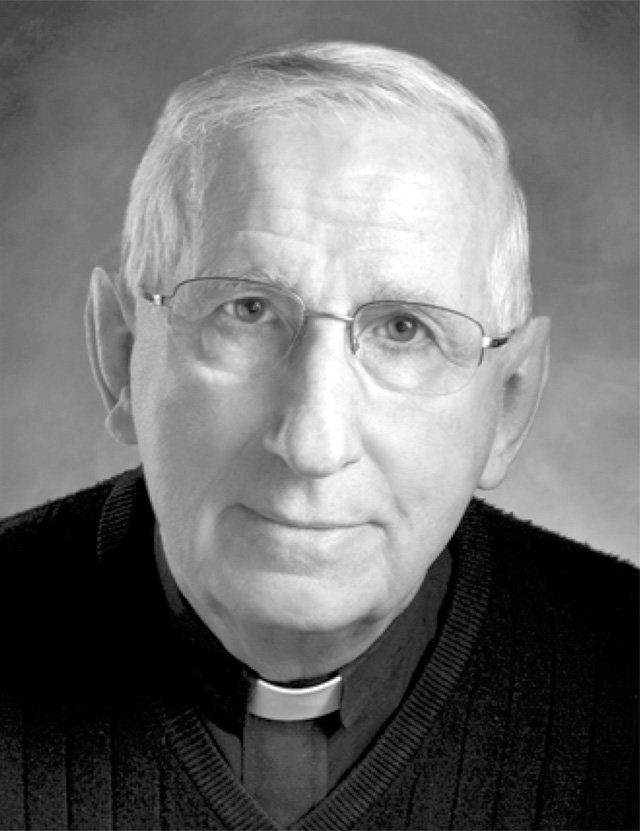 Father Haycock was born Feb. 19, 1930, in Hazleton, Pa. He was received into the Congregation of Holy Cross in 1952 and made his first profession a year later. After graduating from Stonehill College in Easton, Mass., in 1955, he professed his final vows in 1956. He was ordained a priest in the Holy Cross order in 1958. The following year he earned his bachelor’s degree and licentiate in sacred theology from the Pontifical Gregorian University in Rome. He later obtained a master’s degree in education from the University of Rochester in 1967.

After three years of teaching and giving missions, Father Haycock arrived in the Diocese of Rochester in 1962 when Cardinal Mooney in Greece opened. He served as a Latin and theology teacher as well as chaplain at the coeducational high school until 1971. After two years as principal of Notre Dame High School in Niles, Ill., Father Haycock returned to Cardinal Mooney as chaplain. In 1977 he became personnel director of his religious order’s provincial house in Bridgeport, Conn., before once again landing at Cardinal Mooney in 1978 as guidance counselor and chaplain.

When the high school closed its doors in 1989, Father Haycock’s order and the Rochester Diocese permitted him to accept full-time ministry at St. Lawrence Parish. Beginning in 1962, he had served the parish as a part-time assistant while also serving at Cardinal Mooney. Father Haycock went on to serve exclusively at St. Lawrence for more than two decades before relocating to Indiana in 2011.

"The parishioners here loved him. He just was kind to everybody," said Father Lee Chase, the current St. Lawrence pastor, noting that Father Haycock’s acts of kindness included conducting an annual Thanksgiving dinner in the church hall for anybody who wished to attend.

Father Chase added that Father Haycock was an equally beloved and popular figure at Cardinal Mooney.

"Whenever you were talking to a Cardinal Mooney alum, that’s who they talked about," he remarked.

During the 4 p.m. Mass at St. Lawrence on Dec. 10, Father Chase informed the congregation of Father Haycock’s death. He noted that the priest "had just finished saying the rosary" before passing away the previous morning.

Father Haycock is survived by his sister, Mary Ann (Richard) Mason; nieces and a nephew; and grandnieces and grandnephews.

His funeral Mass is scheduled for Dec. 19, 2016, at Stonehill College in Massachusetts, with interment to take place at Holy Cross Cemetery on the college campus. According to Father Chase, St. Lawrence will hold a memorial Mass for Father Haycock at some point after the holiday season.

Memorial donations may be made to the Congregation of Holy Cross, U.S. Province of Priests and Brothers, Office of Development, PO Box 765, Notre Dame, Ind., 46556-0765.