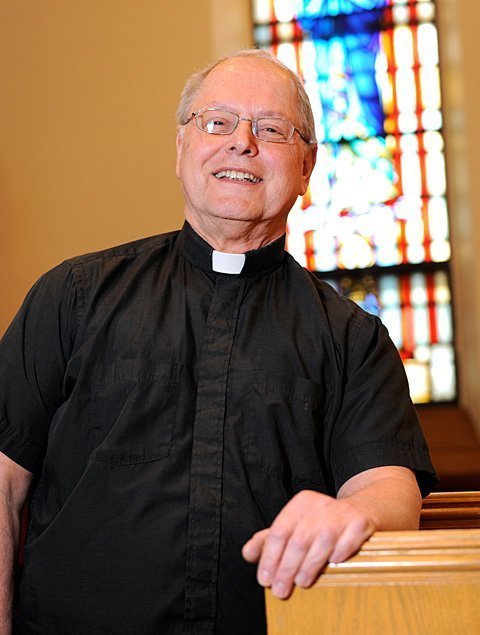 June 25, 1969, was the first day of Father William Endres’ priestly ministry. On that day, the newly ordained priest took on his first assignment as assistant pastor at St. Stephen Parish in Geneva.

This June 25 will be another memorable day for Father Endres, who that day will conclude his active ministry by retiring from assignments at three local parishes and Strong Memorial and Highland hospitals in Rochester.

Father Endres grew up in Irondequoit, where he attended St. Salome Parish and grammar school. When he was 12 his parents allowed him to take the bus from Irondequoit to downtown Rochester, where he passed the time watching trains at the New York Central Railroad station. The first seeds of his future vocation were sown after one such outing in late July 1955.

"One day I looked up at the engineer of the Empire State Express and he said, ‘Son, you don’t want to do this,’" Father Endres recalled. "That very evening I had to serve as an altar boy at the St. Anne’s novena at St. Salome Parish, and from then on I was sort of right-hand assistant to the priest at St. Salome. I became very interested in being around the church, and I always looked for opportunities to serve."

Two years later in 1957, he enrolled atSt. Andrew’s Seminary in Rochester at the urging of his eighth-grade teacher. After completing his studies at St. Andrew’s as well as St. Bernard’s seminaries, he was ordained June 7, 1969, by Bishop Fulton J. Sheen at Sacred Heart Cathedral.

Father Endres was chaplain at Rochester General Hospital from 1994-2001 while also serving at St. Andrew and St. Philip Neri parishes in Rochester. Since 2002 he has been chaplain at Rochester’s Strong Memorial and Highland hospitals as well as assisting priest at St. Mary of the Assumption Parish in Scottsville. In 2011 he also took on an assisting role at St. Columba/St. Patrick Parish in Caledonia and St. Vincent DePaul Parish in Churchville when those two parishes merged with St. Mary.

Father Endres said he’s enjoyed the combination of hospital and parish work, which afforded the opportunity to support people in their times of deepest need and be with them in their sorrows and their joys.

He hopes to travel in retirement — by train, of course.