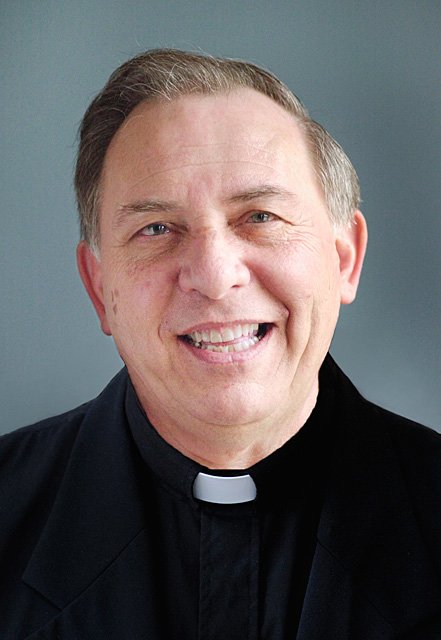 Father Frank Falletta retired in April after serving as pastor of St. Lawrence Parish since 1984.

GREECE — He led St. Lawrence Parish for some 30 years, yet Father Frank Falletta made his exit short and sweet — and, in typical fashion for him, humorous.

In a homily lasting perhaps three minutes, Father Falletta opted to keep it light at the 5:30 p.m. Mass on April 26 that served as his retirement/farewell liturgy. He started out by wondering if the people nearly filling the 1,150-seat church were there just to make sure he was really leaving.

Father Falletta then paid sincere homage to his flock, saying, "It’s been a joy for me to work with you. I will never, ever forget the people of this parish. You’re marvelous and I thank God for that every day." He said he would pray for everyone and asked for their prayers as well, especially "that the Lord can keep me out of trouble."

He ended his homily by bestowing a blessing on the congregation. As he returned to his seat, he was greeted by a thunderous standing ovation. Following the Mass, a reception in his honor was held in the parish center.

Father Falletta, 73, grew up in Rochester’s Our Lady of Mount Carmel Parish and attended St. Andrew’s and St. Bernard’s seminaries. He was ordained a priest June 4, 1966, by Bishop James E. Kearney at Sacred Heart Cathedral.

In 1984 he began at St. Lawrence. Only the third pastor in parish history, he was at St. Lawrence’s helm for more than half of its 55-year existence. At the time he retired, his was the second-longest pastorate in the Diocese of Rochester.

Under Father Falletta’s guidance, St. Lawrence grew rapidly in both membership and physical structures. Starting out in 1959 as a 400-family community, the parish was at 1,600 families when Father Falletta arrived. Sensing potentially greater growth at hand, Father Falletta — after only one year as pastor — launched a capital campaign that resulted in a parish center being opened in 1988 and a new church the following year.

The church has since been expanded, and yet another new parish center, Deacon Hall, opened in 2006. St. Lawrence School also has undergone expansion during Father Falletta’s pastorate. By the time of St. Lawrence’s 50th-anniversary jubilee in 2009 it had become a 3,500-family community, making it one of the largest parishes in the diocese.