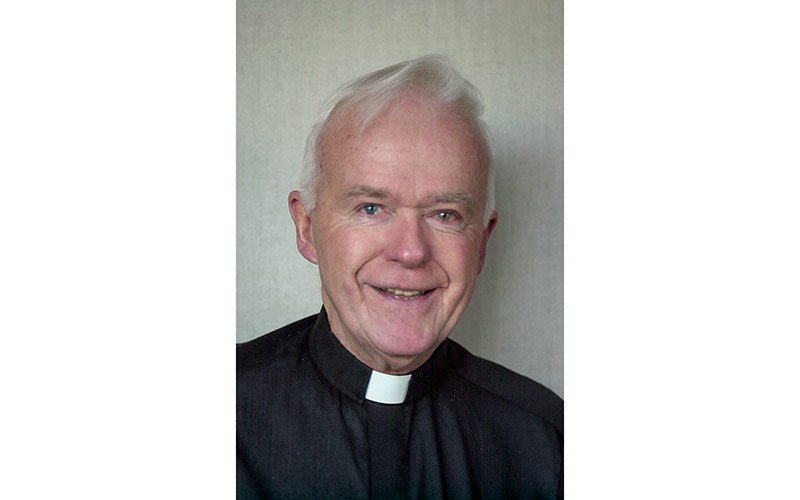 Father Frederick W. Bush, who spent 30 of his 66 years in the diocesan priesthood as pastor of Penfield’s Church of the Holy Spirit, died Dec. 8, 2017, at the Sisters of St. Joseph Motherhouse in Pittsford following a long illness. He was 91 years old.

Father Bush grew up in Rochester’s Blessed Sacrament Parish and attended the parish school — where, he recalled in a 2001 Catholic Courier article, a pivotal event set him on the path to priesthood. Asked by his teacher to accompany a classmate to an entrance examination for St. Andrew’s Seminary, he ended up taking the exam as well.

In 1971, Father Bush began his first and only pastorate, taking over Holy Spirit, which had been founded just six years earlier. Ann Matuck, a charter parishioner, said that Father Bush spurred significant growth of the fledgling parish by encouraging members to become involved.

“He was a quiet man, very humble,” she added. “He always had a smile on his face. He drew us to him like Christ walking the earth, just with his humility.”

In 1990 a parish center was dedicated in Father Bush’s name. At his insistence, the facility has hosted numerous community programs including Alcoholics Anonymous, Scouting, Kiwanis, voting and an adult day-care program.

In addition to his pastorate of three decades, Father Bush served on the diocesan Presbyteral (Priests’) Council and Clergy Relief Board and was regional coordinator for northeast Monroe County. A fourth-degree member of the Knights of Columbus, he was devoted to pro-life issues.

Father Bush reached senior-priest status in 2001. At that time he relocated to St. Mark Parish in Greece where he remained active for a number of years before eventually moving to the Sisters of St. Joseph Motherhouse.

“Nobody knows for certain how much he did. You hear more and more stories,” said Father Louis Sirianni, pastor of St. Mark, noting that Father Bush made scores of hospital and home visits during his time at St. Mark. “He was known by many people and they would call on him.”

Father Sirianni described Father Bush as “compassionate, a good listener, very gentle,” adding that he “was very generous and loved his family.”

Father Bush is survived by his sister, Dr. Mary T. Bush, and many cousins.

Calling hours for Father Bush will be Dec. 12 at the Sisters of St. Joseph Motherhouse, 150 French Road, beginning at 4 p.m. and concluding with vespers led by Bishop Salvatore R. Matano at 7 p.m. He will lie in state at Church of the Holy Spirit, 1355 Hatch Road, Penfield, on Dec. 13 from 9 to 10 a.m., followed by a funeral Mass celebrated by Bishop Matano with Father Thomas M. Erdle serving as homilist. Interment will be at Holy Sepulchre Cemetery.