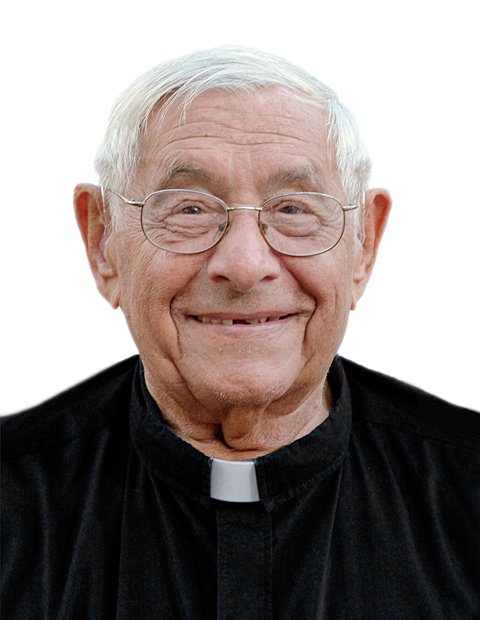 Yet in spirit, he was forever a kid.

Father Ventura, a popular presence at youth retreats during his retirement years, died Jan. 22, 2016. He was 97 years old.

"He was beloved by young and old alike," commented Michael Theisen, who from 1992-2005 was coordinator and later director of diocesan youth ministry.

Father Ventura went on to serve two more pastorates: at Geneva’s St. Francis de Sales from 1970-80, and at Holy Ghost in Gates from 1980 until his 1989 retirement.

Beginning in the 1990s he became well-known in the diocese for his energy and sense of humor at teen retreats, earned himself the affectionate nickname "Ace" — in reference to the "Ace Ventura" movie character.

"His favorite expression at the closing (retreat) liturgies was to proclaim that the entire weekend was ‘awful’ — full of awe," remarked Theisen, who is currently director of ministry formation for the National Federation for Catholic Youth Ministry.

In a 2008 interview with the Catholic Courier, Father Ventura said his ministry among young people not only gave him pleasure, but also served an important purpose in putting to rest the "children should be seen and not heard" mind-set.

"The older folks should look to the children and not just push them aside. In a few years they are taking our place," he said. "They are the church. We should use the children for the ability and the talents they have."

Jeannie Raisbeck, who first knew Father Ventura at St. Lucy and later was his secretary at Mt. Carmel and Holy Ghost, said the priest sought to start a youth group at every parish at which he was stationed. She added that the priest’s popularity was signified by long lines for receiving the sacrament of reconciliation from him on retreats.

"We’d tell the kids, ‘Why don’t you go to another priest?’ and they’d say, ‘No, I want Father Ace,’" Raisbeck said. "He was very compassionate."

During retirement, Father Ventura created stained-glass windows and lamps, made wine, gardened and did carpentry work. He also provided sacramental assistance at Holy Family Parish in Steuben and Livingston counties, maintaining those duties and staffing youth retreats into his late 80s and even early 90s. In August 2015 Holy Family Parish presented him with a special Christian Witness award.

In recent years Father Ventura resided with Raisbeck and her husband, Thomas, at their Greece home; he died there in his sleep Jan 22, 2016. Raisbeck noted that Father Ventura became a fixture at Greece’s St. John the Evangelist Church during his final years, vesting weekly for Sunday Mass.

Interment will be at Holy Sepulchre Cemetery.