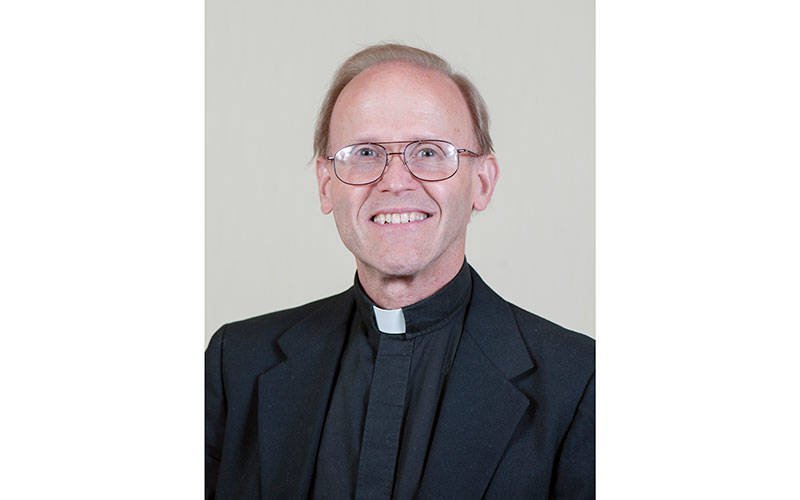 Father George Heyman, pastor of Fairport’s Church of the Assumption and Church of the Resurrection parishes and past president of St. Bernard’s School of Theology and Ministry, died April 16, 2021. He was 66.

Father Heyman was known for both his passion for learning as well as his love of sharing that knowledge with others through his teaching and preaching, according to priests who knew him.

A Rochester native, Father Heyman grew up in Rochester’s St. Andrew Parish and attended the parish school. While completing his seminary studies at St. Bernard’s Seminary in Rochester, he and his twin brother, Ed, also shared the role of parish organist at St. Andrew.

In addition to earning master of arts and master of divinity degrees from St. Bernard’s Seminary, Father Heyman also earned a bachelor’s degree from St. John Fisher College in Pittsford; a master’s in theology from Harvard Divinity School in Cambridge, Mass.; and a doctorate in religion from Syracuse University.

After ordination, Father Heyman served as assistant pastor at St. Mary Parish, Corning (1981-82), and St. Pius Tenth Parish, Chili (1982-84), before becoming associate pastor at Blessed Sacrament Parish, Rochester (1984-85). He later served as parochial vicar at Church of the Assumption, Fairport (1985-87), and Holy Cross Parish, Rochester (1989-90). In between those two posts, he was an associate member of the Basilian Fathers while he taught at Andrean High School in Merrillville, Ind.

He served temporarily at the parishes of St. John the Evangelist, Newark Valley, and St. Francis of Assisi, Catatonk (1990), and St. Anne, Palmyra, and St. Gregory, Marion, while their pastors were on sabbatical. In May of 1991, he became pastor at Church of the Epiphany in Sodus and St. Rose of Lima in Sodus Point.

Father Lance Gonyo completed his pastoral year — the final year of his seminary training — at Church of the Epiphany and St. Rose while Father Heyman was pastor there, and he said Father Heyman soon became one of his close friends.

“He was just a very engaging and supportive person, both to priests and to his own parishioners. He was great with the migrant community when he was pastor there,” Father Gonyo remarked.

Father Heyman later served as parochial vicar at St. Cecilia Parish in Irondequoit and temporary administrator at Holy Apostles/St. Anthony in Rochester and Immaculate Conception in Ithaca before becoming pastor of the Ithaca parish in 1998. He left Ithaca in 2000 to become pastor of Blessed Trinity Catholic Community in Wolcott, Red Creek and Fair Haven.

He also served as chair of the Diocese of Rochester’s Presbyteral Council, a priestly advisory group that assists Bishop Salvatore R. Matano in the pastoral care of the diocese. Father Heyman also was a member of the diocesan College of Consultors, which is a group of priests with whom the bishop consults on such matters as significant church renovations and major financial transactions.

Over the years, Father Heyman also taught at Nazareth College, Binghamton University, Colgate Rochester Crozer Divinity School, Syracuse University and the University of Rochester, and in 2005 he received the Doctoral Dissertation Prize from Syracuse University’s College of Arts and Sciences. He also belonged to several national honor societies.

Father Heyman had an unquenchable thirst for knowledge, according to Father Daniel Condon, chancellor for the Diocese of Rochester.

“When you talk about a lifelong learner, George was absolutely that,” Father Condon recalled, noting that Father Heyman knew many different languages. “He had a real facility for language. He studied the Scripture very diligently, in both an academic and a spiritual manner.”

“He did love to teach. That’s really what he liked doing, and it came through in his preaching. He was a good preacher,” he said.

Father Heyman was a brilliant man and “a font of knowledge,” but what stood out the most about him was his joyful nature, noted Father Thomas Mull, one of Father Heyman’s close friends.

“He was always smiling and laughing. He enjoyed being a priest. He enjoyed the way of life, he was good with people, … and when you were with him, he just sort of exuded that joy,” Father Mull recalled.

“He always communicated joy to other people. He just loved his priesthood very much,” Father Gonyo agreed.

Father Heyman was predeceased by his sister, Patty, and his parents, Mary Ellen and George Heyman. He is survived by his twin brother, Edward Heyman; sister, Cathy (Richard) Hahn; and nieces and nephews, Daniel (Nina), Andrew and Emily Heyman (Matt Nagelschmidt), and Brian and David Hahn.

Father Heyman will lie in state April 23, 2021, from 3 to 6 p.m. at Church of the Assumption, 20 East Ave., Fairport. Evening prayer will be at 7:30 p.m. Bishop Salvatore R. Matano will celebrate Father Heyman’s funeral Mass April 24, 2021, at 7 p.m. at Church of the Assumption. Seating at both evening prayer and the funeral Mass will be limited due to COVID-19 restrictions, so registration is required for both services and may be done online at https://cota.church. Those who are unable to attend the services may watch them via livestream at https://cota.church/livestream.

Father Heyman will be interred at Holy Sepulchre Cemetery in Rochester.