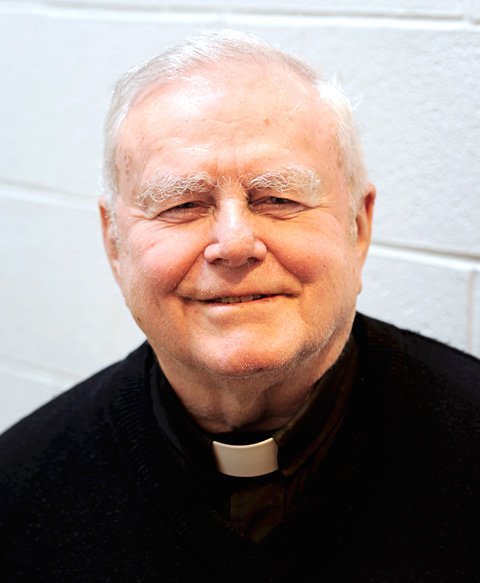 The priest had been known amongst his peers for his dedication to his vocation, noted Father Gerald Appelby, one of Father McMahon’s seminary classmates.

Before becoming a priest, Father McMahon grew up in St. Monica and St. John the Evangelist parishes in Rochester and attended the parishes’ school. He also attended Aquinas Institute, St. Andrew’s Seminary and St. Bernard’s Seminary, all in Rochester. He was ordained by Bishop James E. Kearney on June 5, 1959, at Sacred Heart Cathedral.

He then served as assistant pastor at St. Anthony of Padua in Rochester (1959); Our Lady of Mercy in Greece (1959-60); St. Mary of the Lake in Ontario (1960-69); and St. Mary in Corning (1969-75). He served as associate pastor at Corpus Christi Parish in Rochester from 1975-76 before becoming pastor at St. Patrick Parish in Moravia in 1976. He led that parish for nine years before becoming pastor of St. Gabriel Parish in Hammondsport and St. Patrick Parish in Prattsburgh in 1985.

He left those parishes in 1993 to take a temporary assignment in the Diocese of Scranton, Pa., where he served as administrator for several parishes. In 1998 he retired and returned to Rochester, where he lived at Our Lady of Victory Parish. He later moved to Church of the Holy Spirit in Penfield, where he lived and served as needed for approximately nine years. He later moved to the McAuley Residence at the Sisters of Mercy Motherhouse in Brighton, but before he did, he impressed many Holy Spirit parishioners with his simple yet deep spirituality, remarked Joseph Gerard.

"If you ever went into Holy Spirit, he was always sitting in front of the tabernacle praying his rosary. It was just such a part of his life and who he was. I don’t think he went a day without saying it multiple times," said Gerard, a Holy Spirit parishioner and one of Father McMahon’s close friends.

When Father McMahon learned he was ill, he asked some of his friends not to pray for his healing, but rather, for God’s will to be carried out, Gerard recalled.

"He said don’t pray for what you want. Pray for what God wants. That’s a very simple spirituality, but it was very deep. That’s what inspired a lot of people, I think. He was a model of respect for God’s will for his life, without preaching it, but in living it," he said.