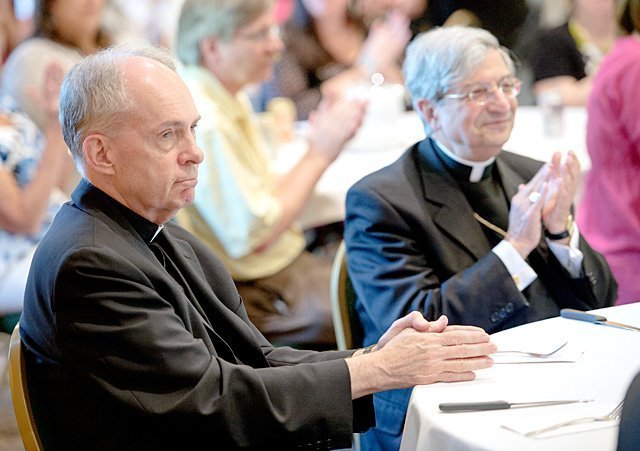 Father Joseph A. Hart (left) and Bishop Salvatore R. Matano (right) react to words of praise for Father Hart during a June 3 reception honoring the priest for his 17 years as moderator of the diocesan Pastoral Center.

When he became diocesan vicar general and moderator of the Pastoral Center in 1998, Father Joseph A. Hart wasted no time in rolling up his sleeves.

His first task was to help address a growing crisis involving Rochester’s Corpus Christi Parish, where leaders’ disagreements with the diocese over several church teachings eventually would lead to a schism that garnered national headlines. Also that year, Father Hart began overseeing implementation of a pastoral plan that led to a major reconfiguration of parishes and Pastoral Center operations.

The ensuring years saw Father Hart carrying out important and often difficult decisions in such areas as renovations, capital campaigns, budgets and staffing.

"It’s a job that has to be done," he said. "You’re working in operations, trying to accomplish what needs to be done, trying to do so in a cost-effective way."

Father Hart’s tenure at the Pastoral Center concluded June 30 when he began as pastor of St. Thomas More and Our Lady Queen of Peace parishes in Brighton. His replacement as vicar general and moderator of the Pastoral Center — also known as moderator of the curia — is Father Paul Tomasso, who had led Greece’s Our Mother of Sorrows Parish since 2013.

Yet Father Hart said his organizational work as director of the diocesan Synod from 1990-93 likely led Bishop Emeritus Matthew H. Clark to consider him for the positions of vicar general and moderator of the Pastoral Center. In the moderator role, Father Hart succeeded Father John Mulligan, who had held that position since 1988 and continued as a vicar general until 2012.

The moderator of the curia functions as the equivalent of a chief operating officer of a diocese. According to the Revised Code of Canon Law, No. 473, this person, "under the authority of the bishop, is to coordinate those things which pertain to the treatment of administrative affairs and to take care that the other members of the curia (diocesan staff) properly fulfill the office entrusted to them. This person is usually a vicar general."

Although the Pastoral Center operated under a deficit budget in his first year, Father Hart noted that it hasn’t run a deficit since. Attaining such fiscal efficiency required him to make staffing cuts that saw the Pastoral Center staff shrink from 127 employees in 1998 to the current total of 83, he acknowledged.

In making such cuts, he said the question to be asked was: "What are the ministerial needs while working within a budget? Here is the bottom line, the pot of money we can work with, and what’s the best use of it." 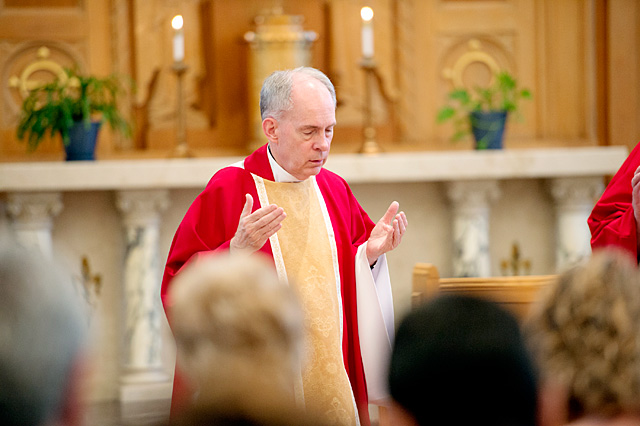 Father Joseph A. Hart concelebrates a June 3 Mass at the Diocesan Pastoral Center in Gates. Father Hart’s tenure as diocesan vicar general and moderator of the Pastoral Center concluded June 30.

Father Hart also has been involved in decisions regarding the consolidation of parishes, closing of schools, major renovations at Sacred Heart Cathedral and the Pastoral Center, and the construction of a new Pittsford facility for St. Bernard’s.

"In each case you’re trying to minimize the negative while always moving toward the positive — what is our mission, how does this advance preaching of the Gospel," he said.

Father Hart said he believes many positive steps have occurred over the past 17 years: "I can’t sit here and say I did this all by myself. It’s really been a wonderful team of people, directors who have made hard decisions with you," he remarked.

His efforts are appreciated by Bishop Salvatore R. Matano, who observed that "Father Hart served as vicar general and moderator of the Curia for 17 years with dedication and enthusiasm. The effects of his leadership can be seen throughout our diocese. I know the faithful at St. Thomas More and Our Lady Queen of Peace will benefit from his knowledge and pastoral experience."

"We’re going to appreciate the depth and breadth of his contributions more and more in the years ahead," Bishop Clark added. "He really has been the best."

Bishop Clark said he considered Father Hart one of three key right-hand men during his 33 years as bishop, the others being Father Mulligan and the late Auxiliary Bishop Dennis W. Hickey.

"Each one gave their heart and soul for the good of the diocese," he said.

"There’s never been a time I haven’t been involved in parish ministry some way or another," he said. "I look forward to returning to full-time ministry."