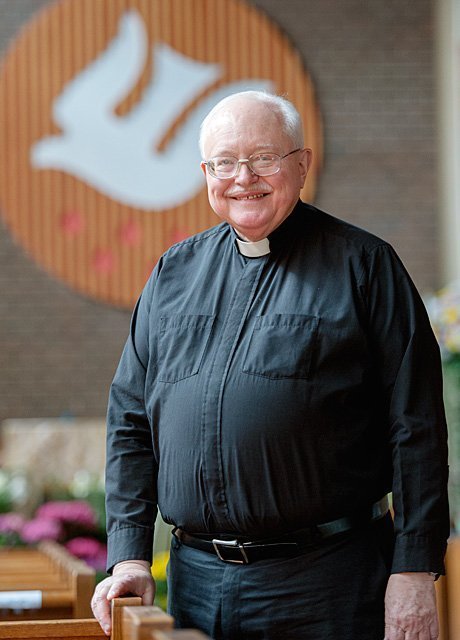 Father P. Frederick Helfrich will retire as pastor of Holy Spirit in Webster at the end of June.

Father P. Frederick Helfrich said he remembers from a very young age experiencing a pull toward the priesthood.

His vocation was nourished by the priests at St. John the Evangelist Parish in Spencerport, a toy Mass kit and the Catholic comic book "Treasure Chest of Fun and Fact," which he said "had a lot of inspiring things."

Now 69, Father Helfrich, pastor of Holy Spirit in Webster for 13 years, will retire at the end of June due to health reasons.

The son of P. Arthur and Doris Elam Helfrich, he attended St. John the Evangelist School in Spencerport followed by St. Andrew’s and St. Bernard’s seminaries in Rochester.

During seminary, he taught religious education and served at area parishes, Monroe Community Hospital and the Rochester Area Multiple Sclerosis Society, where he would later become a member of the board of directors.

He was ordained a transitional deacon in 1969 and served at Our Lady of Mercy in Greece and St. Monica in Rochester, where he helped to establish Southwest Ecumenical Ministry. As a deacon, he also completed clinical pastoral education at Lancaster General Hospital in Lancaster, Pa., and assisted at Sacred Heart in Lancaster.

Bishop Joseph L. Hogan ordained Father Helfrich a priest on April 30, 1971, at Holy Name of Jesus in Greece, where he had served as a deacon intern and then as a priest intern (1970-75).

He served as a confessor for the Sisters of St. Joseph Infirmary and as chaplain at Noyes Memorial Hospital during his time in Dansville.

"It was a wonderful opportunity to serve the sick and those in crisis situations," Father Helfrich said of his chaplaincy service.

In 1997, he began serving at St. Theodore in Gates as associate pastor before being appointed pastor of Holy Spirit in 2001.

He has been very close to the Orthodox churches over the years and received biritual faculties from the Congregation for Eastern Churches and Pope John Paul II. He celebrated his first divine liturgy Feb. 2, 1986, and frequently assists at St. Nicholas the Wonderworker in Gates and St. Josaphat in Irondequoit. He also is an avid collector of religious icons, books and pysanky (Ukrainian Easter eggs).

In retirement, he plans to live at Legacy at Cranberry Landing in Irondequoit, and he may assist if his health permits.

To celebrate Father Helfrich’s retirement, a buffet luncheon has been scheduled for noon to 4 p.m. June 22 at Holy Spirit, 1355 Hatch Road, Webster. To attend, RSVP by May 22 to Shari Magagnoli at 585-671-5520 or SMagagnoli@dor.org.