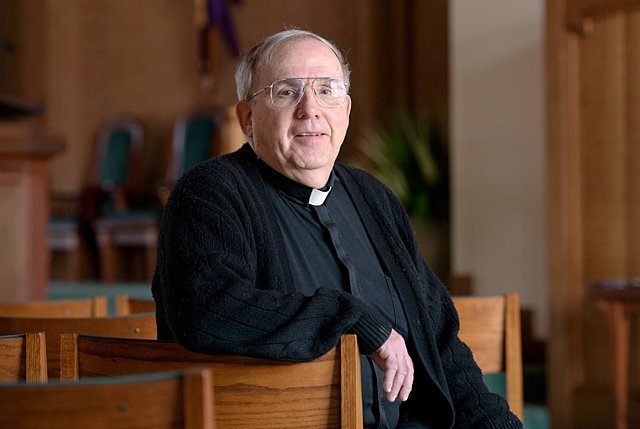 Father James Hewes, who retired in January of this year due to health concerns, poses at St. Mark Church in Greece, where he is currently living.

Although he was quite athletic in his youth, Father James Hewes said he made sure to play with peers who weren’t so agile or socially connected.

"I didn’t push them aside," he said. "Since I’ve been a kid, I’ve always had a heart for the underdog."

In his priestly ministry, the underdogs have included poor folks in the inner city and rural communities, prisoners, unborn babies, and people hurting from abortion.

Father Hewes also has ministered to many people as a parish priest and campus minister. As a senior priest, he said he plans to remain active in ministry, albeit at a reduced pace following his retirement in late January of 2015.

Father Hewes is a native of St. Jerome Parish in East Rochester and a graduate of McQuaid Jesuit High School, St. John Fisher College and St. Bernard’s Seminary. He was ordained March 27, 1974, at Holy Ghost Church in Gates by Bishop Joseph L. Hogan.

Father Hewes was parochial vicar at St. Francis de Sales and St. Stephen in Geneva (1999-2000); pastor of St. John the Evangelist, Clyde/St. Patrick, Savannah (2000-07); pastoral administrator of St. Joseph, Rush (2007-10); and parochial vicar in the Gates Catholic Community from 2010 until his retirement.

The priest is known for his social-justice efforts, many of which were ground-breaking at the time. He helped start Catholic Charities agencies in Livingston and Wayne counties; developed a jail ministry program; was a mediator for the Center for Dispute Settlement; and worked on programs to meet urban housing and hunger needs.

He was one of the original Rochester Area Right to Life board members in 1968, and served as chair of the diocesan Human Life Commission from 1977-84. In 1996, he began his longtime role as diocesan director of Project Rachel, which provides healing for women and men affected by abortion. He has stepped down from that position, but remains available to assist with Project Rachel as needed.

In 2000, Father Hewes was presented with the Dr. Leo Holmsten Human Life Award. More recently, he has been active in fundraising efforts for the densely populated Payatas Community in the Philippines, which is located on a massive garbage dump.

Father Hewes, 68, was granted senior-priest status earlier this year due to the effects of Stage 3 kidney disease. He now resides at St. Mark Church in Greece and assists there and at other area parishes when able. Already his more moderated daily pace has resulted in a reduced stress level and improved health, he said.