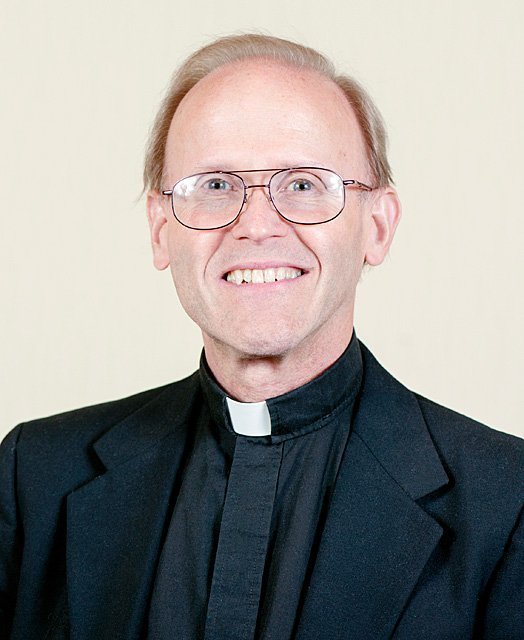 Father George Heyman, a faculty member at St. Bernard’s School of Theology and Ministry since 2007, was recently named president of the school effective Jan. 1, 2015. The appointment was made by Bishop Salvatore R. Matano and the school’s board of trustees.

He will succeed Sister of St. Joseph Patricia Schoelles, who is retiring after having served in the position since 1993.

“St. Bernard’s is going forward in very capable hands, and I rejoice in that,” Sister Schoelles said about her successor.

Ordained a diocesan priest in 1981, Father Heyman, a native of Rochester’s St. Andrew Parish, has ministered at numerous parishes in the diocese including pastorates at Church of the Epiphany, Sodus/St. Rose of Lima, Sodus Point; Immaculate Conception, Ithaca; and Catholic Community of the Blessed Trinity, Cayuga County.

Sister Schoelles, who earned a master’s degree and doctorate from the University of Notre Dame, taught at Nazareth College for four years and then St. Mary’s Seminary and University in Baltimore for eight years before coming to St. Bernard’s.

Under Sister Schoelles’ leadership, St. Bernard’s moved to a new campus in Pittsford with 17,000-square-foot building in 2003; began an extension site in the Diocese of Syracuse; expanded services for students, including the use of regional videoconferencing sites around the diocese; oversaw establishment of the Brennan-Goldman Institute for Catholic-Jewish Understanding and Dialogue at St. Bernard’s; and maintained an acclaimed graduate-level program for lay ecclesial ministers and deacons in formation.

“She’s built a foundation for theological education,” Father Heyman remarked. “She oversaw construction of a wonderful building and has assembled an excellent faculty that provides excellent service.”

“The legacy of St. Bernard’s for all of us who work and teach here is, of course, its graduates and the service they offer to the church and society at large,” Sister Schoelles said. “It has been an honor for me to have been part of the formation of so many wonderful men and women.”

St. Bernard’s history dates back nearly 125 years. It began as a seminary in 1891 and became St. Bernard’s Institute in 1981 when its priestly formation program was discontinued and the school moved from Lake Avenue to Colgate Rochester Divinity School. In 2002 its name was changed to St. Bernard’s School of Theology and Ministry.

The school’s main campus is located at 120 French Road; classes are also offered in Syracuse and Albany. St. Bernard’s offers three master’s degrees in theology as well as continuing-education opportunities.

Father Heyman noted that his association with St. Bernard’s dates back to 1976, when he was one of its last seminarians.

“It is my hope and prayer that we can continue to be a valuable resource for theological education,” he said, adding that the St. Bernard’s of today has a two-pronged mission: “service to the church itself, and service to the ministers of the church — to educate, to form, to reflect on what it means to be a Catholic in the tradition of the Roman Catholic Church, and to bring this relevance to the contemporary Catholic Church.”