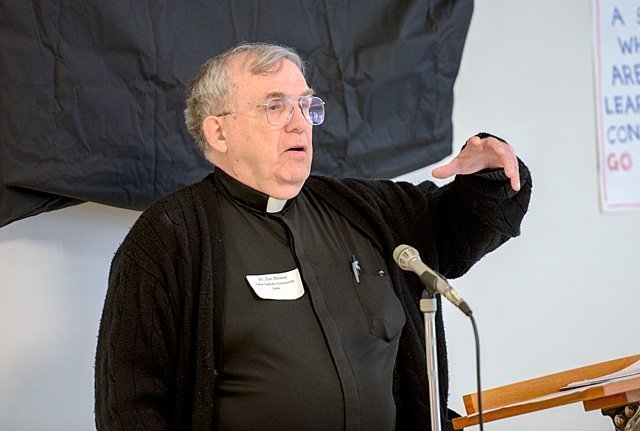 Father James Hewes speaks during the Diocesan Social Ministry Conference held at Our Lady of Peace Parish Center in Geneva in May, 2014. Father Hewes will retire at the end of January.

Father James Hewes, who celebrated his 40th anniversary as a diocesan priest this past year, is retiring effective January 2015 due to health concerns.

In a letter by Father Hewes in the Dec. 14 bulletin of the Gates Catholic Community — where he serves as parochial vicar — the priest noted that his request for retirement has been accepted by Bishop Salvatore R. Matano. His final weekend in the Gates cluster will be Jan. 24-25.

Father Hewes explained in the bulletin that he is “facing some difficult medical problems. I wanted to respond to this situation by entering a much more limited and paced lifestyle of retirement where I don’t have to worry about carrying out responsibilities when I don’t feel up to meeting them.”

Father Hewes, who turned 67 this past March, noted that diocesan policy allows for a priest to retire as early as age 67 when health concerns are involved. He is moving to St. Mark Parish in Greece, stating that he plans to be as active as his health allows. He has been stationed since 2010 in the Gates cluster, which comprises Holy Ghost, St. Helen and St. Jude parishes.

His replacement there is Father Thomas Akowuah, an extern priest from Ghana, who in 2014 served in the Gates cluster and most recently was assisting priest at St. Charles Borromeo in Greece.

The priest may best be known for his many social-justice efforts. He helped start Catholic Charities agencies in Livingston and Wayne counties and was a mediator for the Center for Dispute Settlement. He was one of the original Rochester Area Right to Life board members in 1968, and served as chair of the diocesan Human Life Commission from 1977-84. In 1996 he began his longtime role as diocesan director of Project Rachel, which provides healing for women and men affected by abortion.

Father Hewes was presented in 2000 with the Dr. Leo Holmsten Human Life Award, given annually to a Rochester-area individual for dedication to pro-life causes. More recently, Father Hewes has been active in fundraising efforts for the densely populated Payatas Community in the Philippines, which is located on a massive garbage dump.

This past May, Father Hewes served as keynote speaker at the Diocese of Rochester’s 2014 Social Ministry Conference. During Mass celebrated by Bishop Matano that day, the bishop referred to Father Hewes as “a great spokesperson for life.”