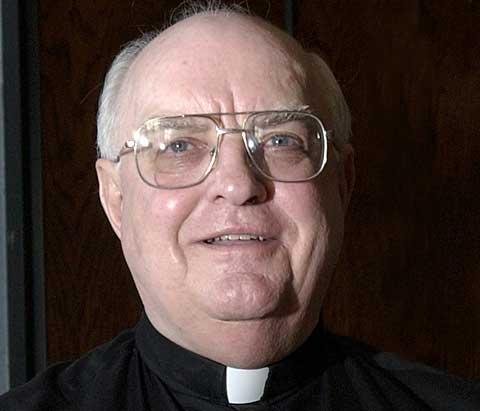 Father Glogowski grew up in St. Monica Parish in Rochester and St. Theodore Parish in Gates. He attended St. Andrew’s and St. Bernard’s seminaries before being ordained at Sacred Heart Cathedral on June 2, 1962, by Bishop James E. Kearney. He also earned master’s degrees from Syracuse University and St. Bernard’s Institute.

From 1979-92, Father Glogowski oversaw pastoral care at St. Ann’s Home. After a brief stint as assistant pastor for churches in Corning and Painted Post, followed by a sabbatical, Father Glogowski became pastor of St. Leo Parish in 1993 and remained in that position until retiring in 2005.

His sister, Nancy Barron, observed that Father Glogowski enjoyed working with youths in all his parish assignments, and that he was equally adept at connecting with senior citizens while at St. Ann’s Home.

"It didn’t matter which generation," she said, adding that he’d chat with St. Ann’s residents "as long as they would want to talk to John. He would never rush anyone. That is such an art, knowing you have deadlines but that they need somebody to talk with."

In a 2005 Catholic Courier article marking his retirement, Father Glogowski noted that in his priestly ministry, "At the end of the day, there’s a joy knowing that you’ve done important things … to see people responding to my efforts to get people to know who Christ is and who he wants them to be."

A classmate, Father Eugene Weis, also remarked that Father Glogowski was an excellent priest but not necessarily somebody who stood out in a crowd: "He was mild-mannered; he was a thinker and ponderer."

The oldest of nine children, Father Glogowski was "extremely family-oriented," according to Barron.

"He was always there when we needed him," his sister said, adding that at family gatherings "John was always the one by the door as everyone walked in, taking pictures."

Donations in Father Glogowski’s memory may be made to the charity of one’s choice.