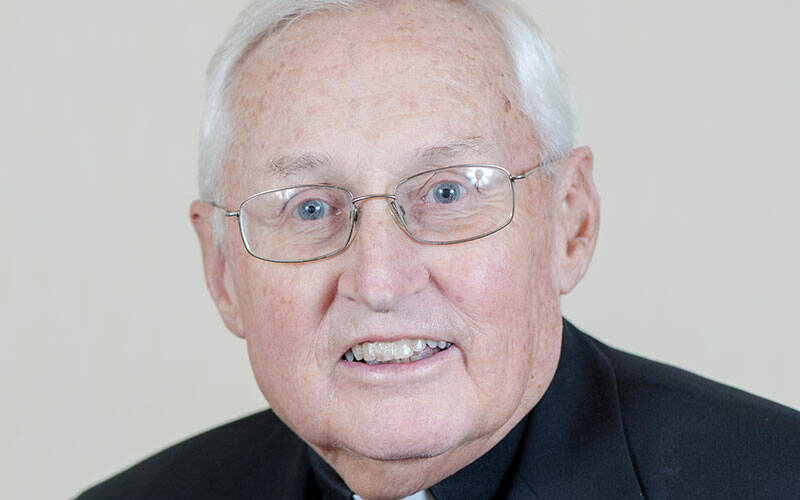 Father John L. O’Connor, who served as pastor of Brighton’s Our Lady of Lourdes Parish for 26 years and was a priest of the Diocese of Rochester for nearly 60 years, died Aug. 18, 2022, due to complications from a recent fall in his home. He was 85 years old.

Father O’Connor grew up in Greece’s Our Mother of Sorrows Parish. He attended Nazareth Hall, St. Andrew’s Seminary and St. Bernard’s Seminary, all in Rochester. He was ordained June 1, 1963, by Bishop James E. Kearney at Sacred Heart Cathedral.

Suzanne Regan, a close friend of Father O’Connor’s from Our Lady of Lourdes, recalled his excitement at becoming pastor at a parish with a Catholic school — now known as Seton Catholic — on its campus.

“He was a frequent visitor to the classrooms and attended all their programs and celebrations. He knew all the children by name,” she said.

Father O’Connor reached senior status in 2006. From that point forward, he assisted regularly at Our Lady of the Lakes Catholic Community while residing in Keuka Park.

Along with serving as a parish priest, Father O’Connor was a U.S. Army Reserve chaplain from 1965-90 and retired a lieutenant colonel. He also organized clergy conferences on behalf of the Rochester Diocese for more than a decade.

Father Richard Brickler, a senior diocesan priest who knew Father O’Connor from their childhood days at Our Mother of Sorrows, said that their friendship grew over the years.

“He was always a very good student and a very good speaker. He had a good talent for preaching homilies and so forth,” Father Brickler said, adding that Father O’Connor had a consistently friendly demeanor and also performed many quiet acts of generosity.

Father Robert Schrader, another senior diocesan priest, noted that he resided with Father O’Connor at Our Lady of Lourdes from 1986 to 1992 while serving as diocesan director of priest personnel.

“He was a wonderful host pastor who took care of his parishioners with great pastoral care. He also served his country well in the Army Reserves,” Father Schrader said. “I was privileged to speak at his 40th- and 50th-anniversary celebrations, and will miss his priestly fraternity.”

Father O’Connor is survived by many cousins and his brother priests of the Diocese of Rochester.