Father Latus to embark on a new journey - Catholic Courier 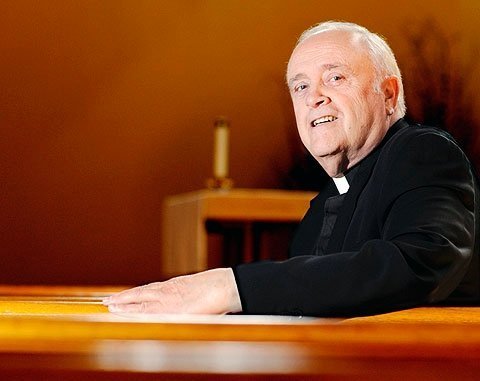 After 44 years as a priest, Father Charles Latus will retire with a June celebration at his current parish, St. Rita in Webster.

Father Latus explained that he first considered the priesthood during his middle-school years when he heard a priest talk about his calling. He also had been an altar server at that time. He continued thinking about a priestly vocation during high school and talked it over with religious brothers at his school, he added. Ultimately, he decided priesthood was his calling as well.

Father Latus was ordained by Bishop Fulton Sheen on June 1, 1968, and his first assignment was as associate pastor of Rochester’s Blessed Sacrament Church, where he served for six years. In 1974, he became copastor of Our Lady of Mercy Church in Greece. Four years later, he became the secretary to the late Bishop Joseph L. Hogan, and continued in that role in 1979 when Matthew H. Clark was installed as Eighth Bishop of Rochester.

"It was a special joy to work closely with Bishop Hogan, and Bishop Clark when he first came," said Father Latus, who was Bishop Clark’s secretary for seven years.

"And now, we’re retiring at the same time," he remarked.

In 1982, Father Latus became director of the diocesan office of Priest Personnel. After four years in that position, he went to Rome for a sabbatical, which provided a great opportunity to meet priests from all over the world and to visit churches in other European countries.

Upon his return from sabbatical, Father Latus was assigned as pastor of St. Catherine of Siena Church in Mendon where he served for 12 years. In the fall 1998, he took another sabbatical, spending a semester at the Washington Theological Union.

"It was a great experience, a very different experience," he said, noting that his fellow students were "a mixture of students, lay and priests and religious — a great cross-section of the church, very much like our own diocese, I think."

In 1999, Father Latus became pastor at St. Rita, where parishioners will host a reception following his last Mass on June 24. The pastor Latus noted that he will have celebrated his 70th birthday two days earlier.

Looking back on his priestly career, Father Latus remarked: "I think about the priests and the people I worked with in all those places. … There has been real grace and growth in every assignment."

He will continue his pastoral duties even in retirement, he added, serving as a part-time chaplain at the Cherry Ridge complex in Webster, which is part of St. Ann’s Community. He also will be responsible for ensuring coverage for the 8:30 a.m. Sunday Mass for 10 weeks in the summer at St. Rose of Lima Church in Sodus Point.

"I’ve done a lot of praying and thinking about what I would do," he added. "It’s a new journey."