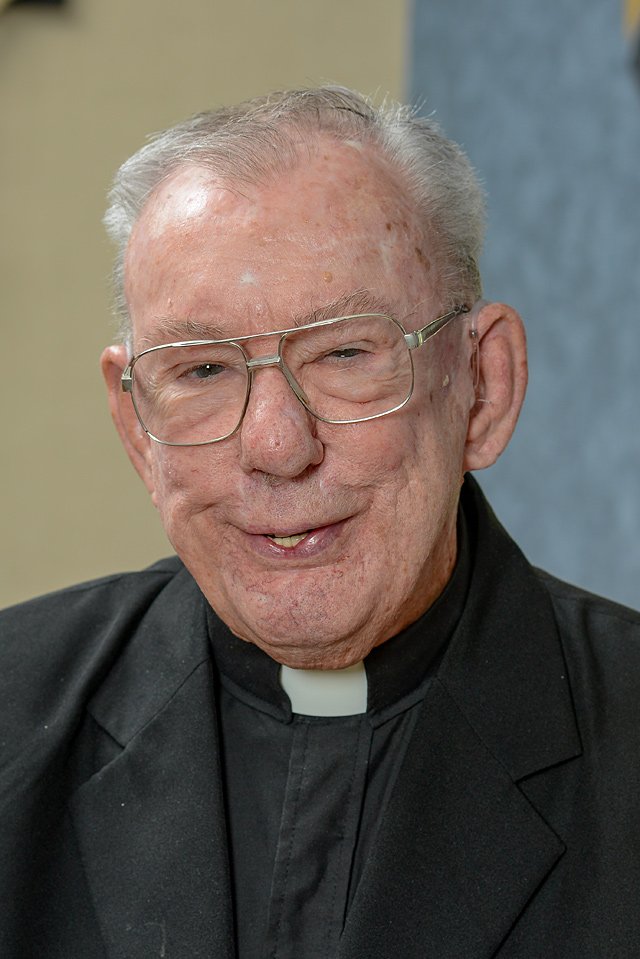 Basilian Father Leo Hetzler, a former chair of the English department at St. John Fisher College, died May 18, 2017, after a short illness. He was 91 years old.

Father Hetzler was born in Rochester and graduated from Aquinas Institute in 1943. Upon graduation, he enlisted in the U.S. Army, becoming a combat infantryman in the 86th Division during World War II. He received the Combat Infantrymen’s Award and remained active as a local and national chaplain of the Combat Infantrymen of America.

After the war, he entered the Congregation of St. Basil on Sept. 12, 1947. He earned a bachelor’s degree and a master’s degree in English literature from the University of Toronto; a bachelor’s of sacred theology degree from St. Michael’s College in Colchester, Vt.; and a Ph.D. in English literature from Cornell University. He was ordained a priest for the Congregation of St. Basil on June 28, 1955.

In 1959 Father Hetzler served as chair of the English department at St. John Fisher College. He also spent several years teaching in Canada in the 1960s, where he began what would become his lifelong interest in the Chesterton Society.

He retired from teaching in 1994 but continued his scholarly pursuits. In 1995, he became the national chaplain for the Combat Infantry Association, and in 1998 he became a member of the board of trustees of his alma mater, Aquinas Institute.

In 2014, he received the President’s Medal for Service to St. John Fisher College.

Father Hetzler lived in the Basilian residence associated with St. John Fisher until he moved to the Sisters of St. Joseph motherhouse in 2015. In June 2016, he was inducted into the Aquinas Institute Hall of Fame.

Father Hetzler’s funeral Mass was held May 24, 2017, at St. Kateri Parish’s Christ the King Church in Irondequoit. Interment was in Holy Sepulchre Cemetery.