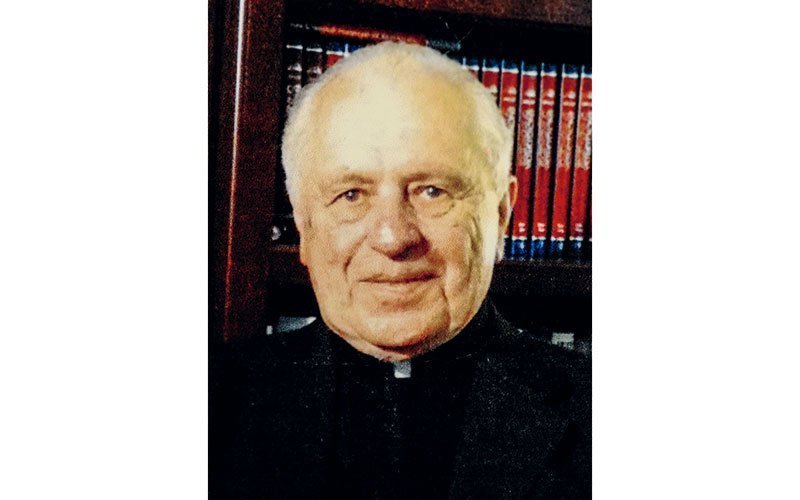 Father Mans grew up in Rochester, where he belonged to St. Michael Parish. He attended its parochial school, followed by Aquinas Institute and then St. Andrew’s and St. Bernard’s seminaries, all in Rochester.

“He was very bright,” recalled Msgr. Gerard Krieg, who had known Father Mans since they were in first grade together at St. Michael School.

“He was a brilliant student,” agreed Father Bernard Dollen, one of Father Mans’ classmates in the seminary.

Father Mans was at St. Philip Neri when a fire broke out in the church in February 1967. St. Philip Neri’s pastor, Father George Weinmann, and Sister Lilian Marie McLaughlin, SSND, were killed when they rushed into the building to rescue the Blessed Sacrament. Father Mans said much later in life that the events of that night remained among his most vivid memories, and he’d been inspired by the kindness shown by members of St. Philip Neri and neighboring parishes in the aftermath of the tragedy.

Later in 1967, he left St. Philip Neri and became assistant pastor at Rochester’s Our Lady of Perpetual Help, where he served until 1972. He later was pastor at Good Shepherd Parish, Henrietta (1972-73); at St. Anthony of Padua Parish, Rochester (1973); and St. Ignatius Loyola Parish, Hornell (1973-83). He reached senior status in 1983 and moved to Pennsylvania to be near his family.

Throughout the many decades of his priesthood, Father Mans was well-liked and was a good man and a good priest, Father Dollen noted.

“He had a nice smile. He was very kind to everybody,” he said.

“He was a loyal friend,” Msgr. Krieg said. “In terms of his ministry, too, he was very thoughtful of others.”

Father Man’s funeral liturgy will be celebrated in Pennsylvania.