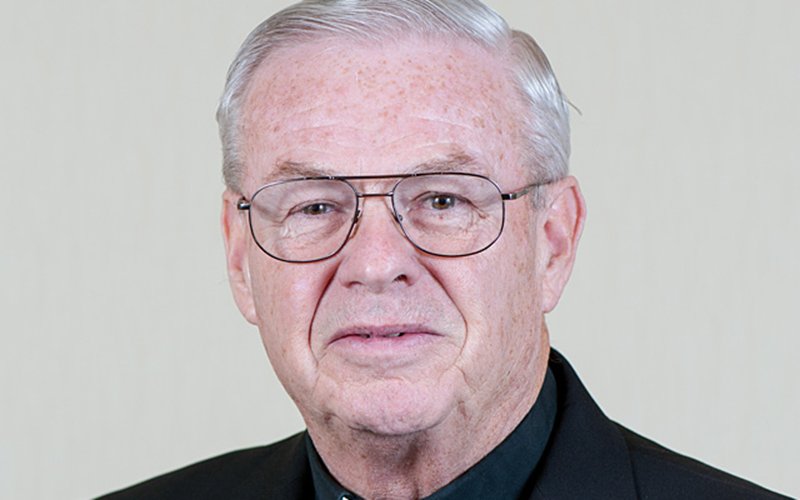 Father Lewis Brown, who served 22 of his 53 priestly years as a military chaplain and was later a fixture at Corning’s All Saints Parish for more than a decade, died Sept. 5, 2020. He was 79 years old.

Father Brown was an Elmira native who grew up in St. Mary Southside Parish. He attended Elmira Notre Dame High School and St. Andrew’s and St. Bernard’s seminaries, and was ordained a priest of the Diocese of Rochester on June 3, 1967, by Bishop Fulton J. Sheen at Sacred Heart Cathedral.

He served as assistant pastor at Church of the Assumption, Fairport (1967-70); St. Alphonsus, Auburn (1970-72); and St. Ann, Hornell (1972-77), where he interviewed children about faith-based topics and played children’s music for a local radio show called “Sunday School.” He then was director of the diocesan religious-education office (1977-81) and assistant at Immaculate Conception, Ithaca (1981-85).

In 1985, Father Brown began a full-time, 22-year commitment as a United States Navy chaplain, reaching the rank of captain and serving in such varied settings as Okinawa, the USS Nimitz, Arlington National Cemetery and a Chicago recruitment base. He retired from active military duty in 2007 and settled in the Corning/Painted Post area, becoming parochial vicar at All Saints Parish in 2008. He continued to be highly involved in the parish community after reaching senior-priest status in 2012, also assisting at the Bath VA Medical Center and enjoying affiliations with the Ancient Order of Hibernians, Knights of Columbus, Catholic Charities and Big Brothers Big Sisters.

“In Corning, you would see him at various civic functions, giving the invocation, participating in a prayer or simply being present, all of which he did so well. At the parish, he was involved and present with everything,” said Father Matthew Jones, pastor of All Saints. “Father Brown was the glue that held us together. It is hard, difficult and painful for us to imagine our lives without him.”

“When I think of my classmate Father Lewis Brown, St. John Henry Newman’s definition of a gentleman immediately comes to mind: one who never speaks of himself except when compelled, has no ears for slander or gossip, is never mean or little in his disputes. Lew was a true gentleman,” remarked Father Frank Lioi, a member of Father Brown’s ordination class, who serves as pastor of Ss. Mary and Martha and St. Mary parishes in Auburn.

He will lie in state at St. Mary Church, Corning, on Wednesday, Sept. 9, from 2 to 6 p.m. with the public invited to attend. Due to COVID-19 restrictions, the following services are private with reservations required: evening prayer Sept. 9 at 7 p.m., and the funeral Mass Thursday, Sept. 10, at 10 a.m. Both will be livestreamed at www.allsaintsparish.org. Interment, with full military honors, will be at St. Mary Our Mother Cemetery, Horseheads.