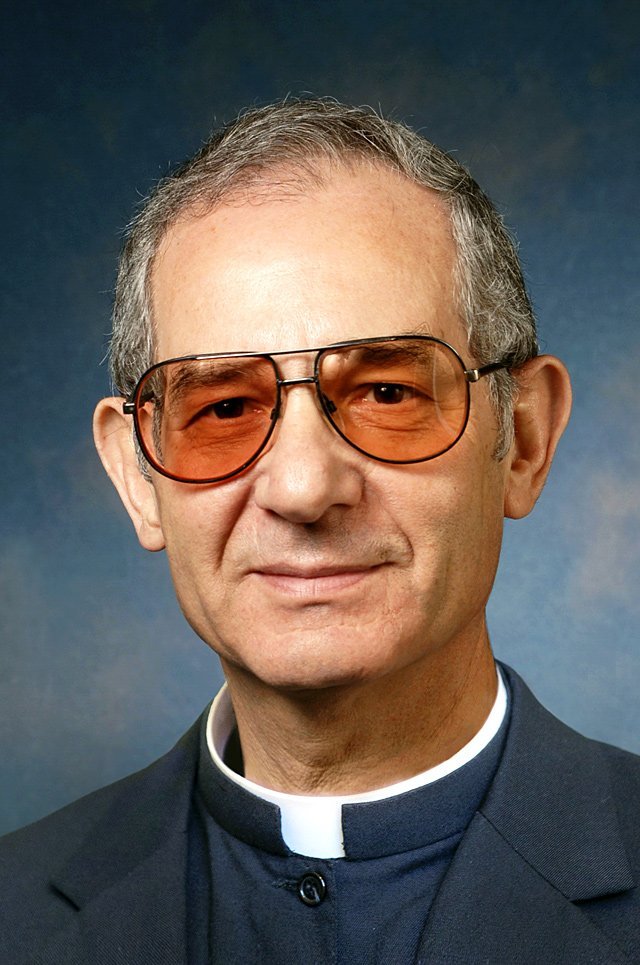 Father Michael Costanzo, a longtime professor of religious studies at St. John Fisher College, died May 24, 2017, after a brief illness. He was 73 years old.

Father Costanzo never stopped teaching, even in his final days, according to Father William Graf, chair of St. John Fisher’s religious-studies department. He taught at the school until March, when he was diagnosed with a cancerous brain tumor, and although he could no longer teach in the classroom after that point, he continued to lead his students by example, Father Graf said.

The course he taught during the spring 2017 semester was called, “The Problem of Evil,” and in this course Father Costanzo taught his students not to run from the evils in the world, such as cancer and sickness. During the course of his own battle with cancer, Father Costanzo once remarked that it would be very easy for him to stop fighting and simply die, but he wanted his students to know how important it was to persevere and fight in the face of evil, Father Graf recalled.

“That was his last lesson, and he taught it by the way he dealt with his own cancer and his last days,” Father Graf said.

Father Costanzo’s earliest days were spent in the village of Valguarnera in Sicily, where he was born in 1943. He attended high school in the city of Piazza Armerina, where he also completed four years of theological studies. He then taught humanities and religious studies in the Sicilian city for eight years.

He eventually moved to the United States to join family members already living in this country. In 1966 Bishop James E. Kearney ordained him to the priesthood on behalf of the bishop of the Diocese of Piazza Armerina, and Father Costanzo became a priest of the Sicilian diocese. He returned to Sicily and lived there for several years before returning to Rochester in 1970. He served as parochial vicar at St. Jerome Parish in East Rochester from 1971-83.

After leaving the East Rochester parish, Father Costanzo returned to Italy and earned a doctorate in biblical theology from the Pontifical University of St. Thomas in Rome in 1987. Upon his return to the United States in 1987, he joined the faculty at St. John Fisher College and taught there until early 2017.

“He was passionate about his work, his reading, his music; passionate about responding to people’s needs,” Father Graf said. “He was hospitable. He always made time for people. The students would come into his office and he wouldn’t just sit and talk to them, but oftentimes would offer them a cup of espresso or a cookie or something as he was going through their paper or talking about whatever was bothering them.”

Father Costanzo, who authored several books of poetry and prayer, also frequently helped at St. Paul Parish in Webster. He celebrated Mass there one weekend a month, and he also celebrated the sacrament of reconciliation at St. Paul, noted Father Paul Gitau, pastor.

Father Costanzo was known for his preaching, and during his homilies he frequently recommended new books for parishioners to read, Father Gitau said.

“Parishioners liked him,” Father Gitau said. “He was a good priest, simple and humble, and he did not want himself to be the center or the focus of anything.”

Memorial donations may be made to the Open Door Mission (www.opendoormission.com) or Villa of Hope (www.villaofhope.org).