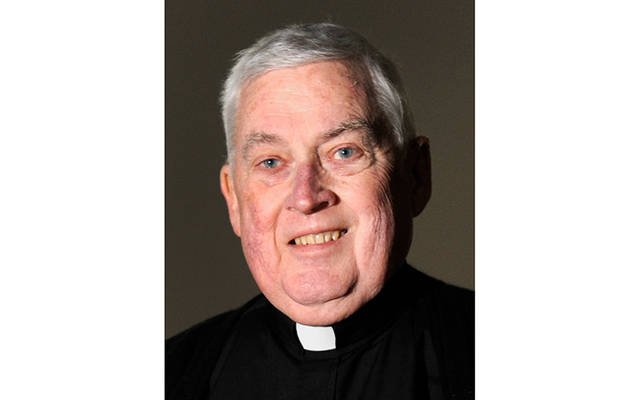 An Auburn native, Father Conboy belonged to St. Mary Parish as a child and attended St. Mary School as well as Holy Family High School, also in Auburn. He completed his seminary studies at St. Andrew’s and St. Bernard’s seminaries, both in Rochester.

In 1969, Father Conboy became secretary to Bishop Joseph L. Hogan, the newly named bishop of the Diocese of Rochester, and served in that position until 1978, when Bishop Hogan retired due to poor health. During his nine years as the bishop’s secretary, Father Conboy also served as pro-synodal just in the diocesan Tribunal and as diocesan consultor.

Father Conboy also served for a decade as diocesan director of priest personnel (2000-2010) and for five years as rector of the diocese’s Becket Hall program for men discerning vocations to the priesthood. Although he reached senior status in 2010, he later served as parochial administrator of Holy Family Parish in Auburn for a time. After completing that assignment, he regularly assisted at Ss. Mary and Martha Parish in Auburn and Sacred Heart/St. Ann parishes in Auburn and Owasco, as well as St. Patrick Church in Aurora, which is part of Good Shepherd Catholic Community.

Whether he was interacting with people in a parish or working in the diocesan Pastoral Center, Father Conboy was always interested in the people around him, according to Father Robert Bradler, who met Father Conboy while the two were in seminary. The two were friends for more than 60 years, and had talked over the phone every few weeks during the pandemic.

“He was a fun-loving person. He always enjoyed the company of friends, and was very much interested in their welfare and whatever they were doing,” Father Bradler said. “I never saw him angry or anything, either. He always had a very nice smile on his face and was very happy and upbeat.”

Father Conboy will lie in state Dec. 3, 2020, from 9:30 to 11:30 a.m. at St. Mary Church, 15 Clark St., Auburn. His funeral Mass will follow at noon with Bishop Salvatore R. Matano presiding. The Mass will be livestreamed on St. Mary’s YouTube channel. Interment will be at St. Patrick’s Cemetery in Aurora.