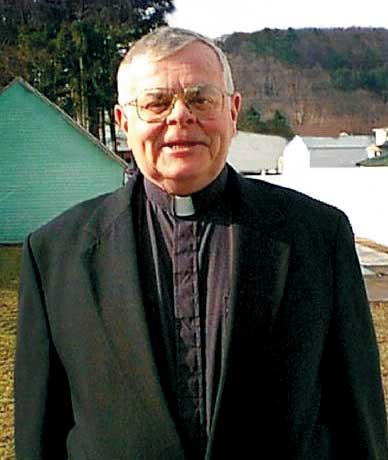 Father Jeremiah Moynihan has spent most of his priesthood ministering in the Southern Tier, so it’s no surprise that he plans to stay there after his upcoming retirement as well.

Next month Father Moynihan will retire from the pastorate at Christ the Redeemer Parish in Elmira, which was formed in 2009. Although the parish is new, Father Moynihan is no stranger to his parishioners and, in fact, has been ministering to many of them since 1998, when he became pastor of Our Lady of Lourdes Parish in Elmira.

Eight years later, Father Moynihan also became parochial administrator of St. Casimir and St. Charles Borromeo parishes, also in Elmira, as the three parishes worked toward becoming one. By 2009 the transformation was complete, and Christ the Redeemer was born.

Although Father Moynihan has spent the majority of his time in the southern part of the Diocese of Rochester, he is not a native of the Southern Tier. He grew up in St. Monica Parish in Rochester, where he attended the parish school. He completed his seminary training at St. Andrew’s and St. Bernard’s seminaries in Rochester, and at Becket Hall at St. John Fisher College in Pittsford. He later earned bachelor’s and master’s degrees from St. John Fisher and St. Bernard’s, respectively.

Auxiliary Bishop John E. McCafferty ordained Father Moynihan March 15, 1974, at St. Stephen Church in Geneva, and later that year the new priest took on his first assignment as associate pastor of St. Vincent de Paul Parish in Corning. In 1977 he left Corning to become associate pastor at Holy Cross Parish in Charlotte, where he remained until 1982, when he became chaplain at St. James Mercy Hospital in Hornell.

Father Moynihan said he feels privileged to have been able to be a part of so many people’s lives. At each of his assignments he’s visited the sick or dying, comforted the bereaved and helped people receive the sacraments, and he said he’s cherished the opportunities to comfort people during their lowest moments and celebrate them during their most joyful times.

After his retirement, Father Moynihan said he will continue to live at Christ the Redeemer and help out there as often as he can.

A retirement party for Father Moynihan has been scheduled for June 21 from 5 to 7 p.m. at the Rev. Paul J. McCabe Parish Center, 11 W. First St. in Elmira. There also will be a celebration July 2 from 5 to 9 p.m. at the Roger Robach Community Center at Ontario Beach Park, 180 Beach Ave. in Rochester. Both parties are open to the public.

"Everyone is welcome," Father Moynihan said.