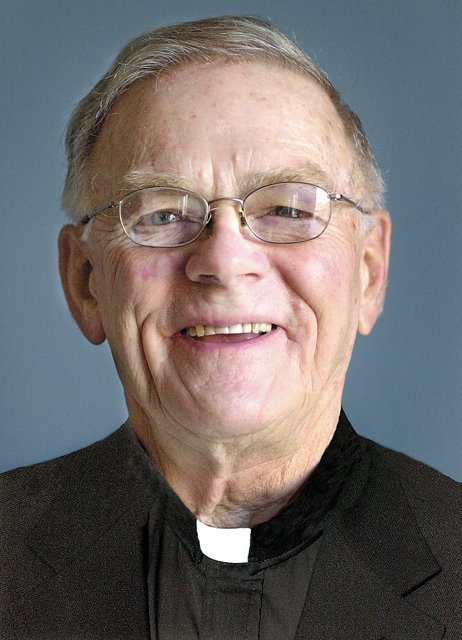 Father Raymond H. Booth, a priest of the Diocese of Rochester for nearly 60 years, died Oct. 15, 2016, at the Sisters of St. Joseph Motherhouse in Pittsford after a brief illness. He was 87 years old.

In 1975 Father Booth became pastor of St. Christopher in North Chili, serving there for 13 years until moving to St. Paul in Webster as pastor. He logged 11 years at St. Paul before reaching senior priest status in 1999. Father Paul Gitau, current pastor of St. Paul, noted that Father Booth "through his faith and good leadership, was a pillar of determination" while overseeing a significant and successful expansion to the church in the 1990s.

"All I ever wanted to do or be is to be a parish priest. I think that is where the church is, where people live out their lives," Father Booth said in a 2007 Catholic Courier article noting his 50th anniversary of priesthood. "I’ve been very happy, and I can’t imagine a life that would give anyone as much affirmation and acceptance as being a pastor."

For many years in the 1970s and 1980s, he also served as diocesan director of Cursillo, a program for spiritual renewal. In addition, he was a member of the diocesan Presbyteral Council.

As a senior priest Father Booth resided at St. Louis Parish in Pittsford, where he remained active and was widely revered.

"I’ve never encountered a more gentle and positive person, always seeing good in others and commenting on it. Praying the liturgy and preaching, he touched countless hearts in our parish. Add to that his visiting, calling, reaching out to folks — truly, Father Ray was a blessing to our entire community, and he will be deeply missed," said Father Robert Ring, pastor of St. Louis.

According to Father Gitau, Father Booth had a similar effect on the people of St. Paul Parish.

"Father Ray Booth was loved here by many people. Many times he came (back) to celebrate Masses, funerals, weddings and anniversaries," Father Gitau said, adding that whenever they crossed paths with each other in recent years "he was always happy to discuss with me about St. Paul’s."

Father Booth will lie in state from 4 to 7 p.m. Oct. 17, 2016, at St. Louis Church, 64 S. Main St., Pittsford. An evening prayer service will follow at 7 p.m. with preaching by Msgr. Gerard Krieg, a fellow senior priest and close friend. Father Booth also will lie in state from 9 to 10 a.m. Oct. 18, 2016. His funeral Mass will begin at 10 a.m., with Rochester Bishop Salvatore R. Matano serving as celebrant. Interment will be at Holy Sepulchre Cemetery.