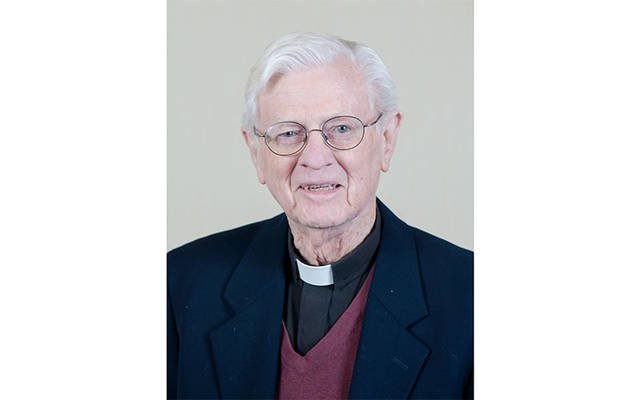 Father Robert C. MacNamara, a priest of the Diocese of Rochester for more than 67 years, died Feb. 8, 2019, at Robert Packer Hospital in Sayre, Pa. He was 93 years old.

A native of Elmira, Father MacNamara was a 1944 graduate of Elmira Catholic High School. He attended St. Andrew’s and St. Bernard’s seminaries in Rochester and was ordained June 2, 1951, by Bishop James E. Kearney at Sacred Heart Cathedral.

Father MacNamara was pastor at St. Vincent de Paul, Corning, from 1983-90, and St. John of Rochester, Fairport, from 1990-92. He served as parochial vicar at St. Mary Our Mother in Horseheads for six months in 1992 before reaching senior-priest status in January 1993. As a senior priest, he assisted at parishes in Elmira and Corning, residing most recently at St. Mary Church in Elmira and remaining active until this past year.

Commonly known as “Father Mac,” the priest “was very loved in the Southern Tier,” according to Aaron Kelly, a seminarian for the Diocese of Rochester currently studying at Pontifical North American College in Rome.

Kelly recalled Father MacNamara’s first Friday Masses while he was a student at St. Mary Our Mother School in Horseheads, saying that the priest would bring out stuffed animals during homilies. As he began pursuing a priestly vocation in more recent years, Kelly got to spend more time with Father MacNamara.

“I learned so much from him. Father Mac loved being a priest, and he lived his vocation faithfully to the end. That is very inspiring to me,” Kelly said, noting that he was glad to have shared lunch with Father MacNamara this past summer just before leaving for Rome. He added that Father MacNamara was an avid University of Notre Dame football fan, attending games annually in South Bend, Ind., right up until 2017.

“He had a great wit and loved being a priest, and was beloved by the parish. He’d go and visit the people before Mass at St. Mary’s, walking up and down the aisle with his cane,” said Father Kubinski, whose parish comprises all of Elmira’s Catholic churches. “He was very supportive to me and was a delight to have around.”

Father MacNamara is survived by his nieces, Lynne Thompson, Ellen McGurgan and Anne Lyman; and his fellow priests and many friends.

He will lie in state on Thursday, Feb. 14, from 4 to 7 p.m. at St. Mary Church, 224 Franklin St., Elmira. Rochester Bishop Salvatore R. Matano will then preside at vespers at 7 p.m.
Father MacNamara’s funeral Mass is set for Friday, Feb. 15, at noon at St. Mary Church, with Bishop Matano serving as celebrant. Interment will be at Elmira’s Ss. Peter and Paul Cemetery.
Copyright © 2022 Catholic Courier, Inc. All rights reserved. Linking is encouraged, but republishing or redistributing, including by framing or similar means, without the publisher's prior written permission is prohibited.