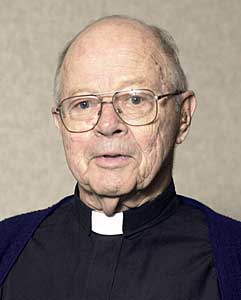 Father Robert Meng, longtime diocesan priest and former pastor of Holy Rosary Parish, died June 21, 2010, at the Sisters of St. Joseph Motherhouse in Pittsford following a long illness. He was 91.

Father Meng was born in Rochester in 1919, and grew up attending St. Augustine Parish. He later attended St. Augustine’s school before completing his seminary training at St. Andrew’s and St. Bernard’s in Rochester. He was ordained March 17, 1945, by Bishop James E. Kearney at Rochester’s Sacred Heart Cathedral.

After leaving Corpus Christi Father Meng traveled to western Africa with Catholic Relief Services. He worked for two years as a CRS program director in the Congo and Benin, which at the time was known as Dahomey. Father Meng enjoyed his time in Africa so much that he brought back an unusual souvenir — a pair of parrots, noted Father William Gordinier, who lived next door to Father Meng at the Sisters of St. Joseph Motherhouse for the last few months.

After his return from Africa, Father Meng became pastor at Rochester’s Holy Rosary Parish, which coincidentally had been Father Gordinier’s home parish. Father Meng spent the bulk of his vocation at Holy Rosary, which he led from 1968 until his retirement in 1993.

Father Gordinier said he enjoyed spending time with Father Meng, and the two often shared a newspaper over breakfast.

"He was always happy, and he smiled a lot," Father Gordinier recalled.

Father Meng usually could be found working on puzzles in the motherhouse, and completed one just hours before he died, Father Gordinier said, noting that motherhouse staff planned to glue the pieces of Father Meng’s final puzzle together and display it in his memory.

Memorial donations may be made to Archangel School, 95 Stanton Lane, Rochester, NY 14617.