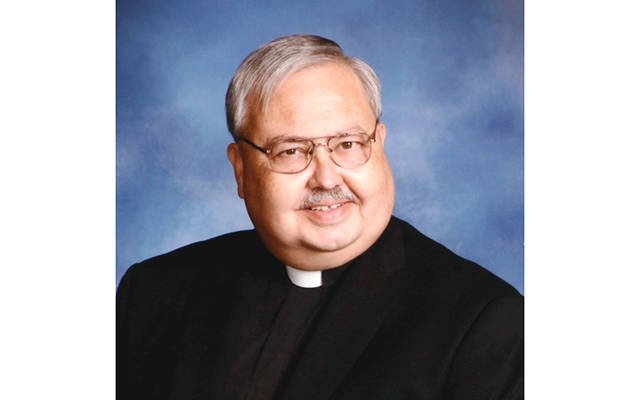 Father Michael J. Schramel, pastor of the Parish of the Holy Family in Gates and a diocesan priest for 40 years, died suddenly Oct. 25, 2020. He was 68 years old.

Father Schramel grew up in Gates, where he belonged to St. Theodore Church. He attended King’s Preparatory School and graduated from St. John Fisher College and St. Bernard’s Seminary, all in Rochester.

Father Robert Schrader, pastor of Rochester’s Peace of Christ Parish, first met Father Schramel in 1966 while they were in high school.

“He was a very good singer, always has been,” Father Schrader recalled, noting that Father Schramel participated in the Glee Club in both high school and college.

He served as assistant pastor at Church of the Nativity of the Blessed Virgin Mary, Brockport (1980-83) and an associate pastor at Holy Trinity, Webster (1983-85). He served as campus chaplain at SUNY Brockport from 1985-94.

His first pastorate was at Holy Family Church in Rochester in 1994. He then returned to St. Ambrose and served as pastor from 1996-2004. From there, he became pastor of Holy Family Parish, which comprises St. Mary in Dansville, Livingston County; and the Steuben County churches of St. Joseph, Wayland; Sacred Heart, Perkinsville; and St. Pius V, Cohocton.

“It is hard to believe that I am celebrating 40 years of ministry,” Father Schramel said in June 2020 reflecting on his 40 years of priestly ministry. “Each day has its own blessings and challenges, as each day I have known the blessings of God’s grace guiding my steps. While I am often painfully aware of my aging body, it seems that ministry is always fresh and young as I’m blessed each day with the many people who guide God’s grace into my life.”

Father Schrader said he last saw Father Schramel earlier this month when they, along with three other diocesan priests, went on their annual trip to Big Moose Lake in the Adirondacks, where Father Schramel did all of the cooking.

“He was our main cook,” Father Schrader said. “He was an excellent cook.”

Father Schramel also enjoyed spending time at his cottage on Conesus Lake and would invite parish staff members and friends to the cottage for meetings and retreats.

“He always had that ray of hospitality about him,” Father Schrader remarked.

“He was a good friend, and we are going to miss him in our group,” he added.

Bishop Salvatore R. Matano will preside at Father Schramel’s funeral Mass on Oct. 30, 2020, at noon at the Parish of the Holy Family. The church will open at 11 a.m., and the funeral Mass will be livestreamed.

Interment will be at Holy Ghost Cemetery in Gates. Contributions in Father Schramel’s memory may be made to Holy Childhood, 100 Groton Parkway, Rochester, NY 14623.