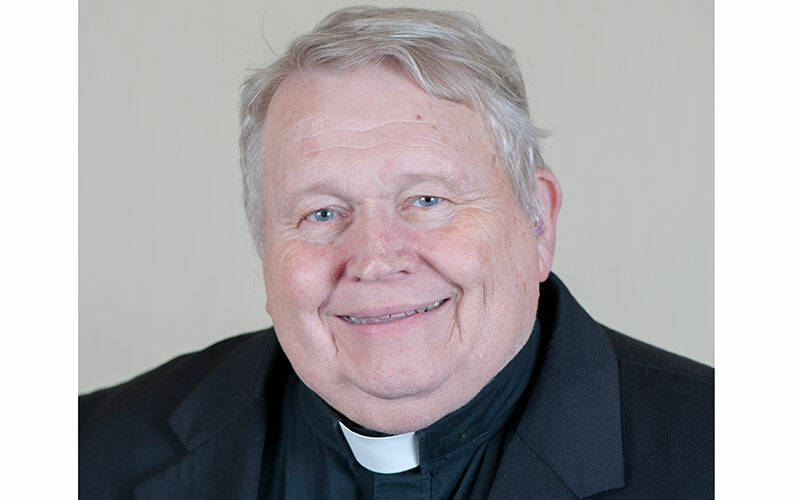 Father Thomas Wheeland, whose 55-year priesthood was highlighted by a 35-year tenure as pastor of Holy Cross Parish in Rochester, died Dec. 7, 2021, at Rochester’s Strong Memorial Hospital. He was 82 years old.

Father Wheeland was a native of Elmira. He was baptized at St. Cecilia Church and confirmed at his home parish, St. Patrick. He attended St. Andrew’s and St. Bernard’s seminaries before being ordained June 4, 1966, by Bishop James E. Kearney at Sacred Heart Cathedral.

His first and only pastorate began in 1982 at Holy Cross, located in the Charlotte section of Rochester where the Genesee River meets Lake Ontario. Father Wheeland remained a fixture in his pastorate, passionately supporting Holy Cross Parish and its school until reaching senior status in 2017 due to mounting health difficulties.

He spoke of his great affection for the Holy Cross community in a 2017 Catholic Courier article, saying, “I love the people, the people are great, that is what gave me the spirit to go on for 35 years.”

“His love for Holy Cross showed in everything he did,” remarked Father John Reif, a senior priest in the Diocese of Rochester, who spent many years in residence with Father Wheeland at Holy Cross.

“Father Wheeland was a joyful priest and loved Holy Cross parish and school,” agreed Father Timothy Brown, parochial vicar at Rochester’s Peace of Christ Parish, who served in the same role at Holy Cross from 1991-95. “He was so dedicated in serving and ministering to the people as a priest.”

Father Reif added that Father Wheeland lent a consistent presence to parish and school events — “Everything, however small or large that took place, he was a part of” — and that the longtime pastor toiled constantly on behalf of Holy Cross.

“No project or activity was too small or too large for him to tackle,” Father Reif said.

Father Reif also noted that Father Wheeland “was a very congenial host” for many dinner gatherings of area priests that took place at Holy Cross.

In recent years, as a senior priest, Father Wheeland maintained ties to Holy Cross by frequently visiting the parish. He also ministered at Greece’s Our Mother of Sorrows Parish as well as at The Villages at Unity, a senior-care facility in Greece where he resided.

In addition, Father Wheeland was the longtime chaplain for the Rochester Police Department and a board member of Rochester’s Holy Sepulchre Cemetery.