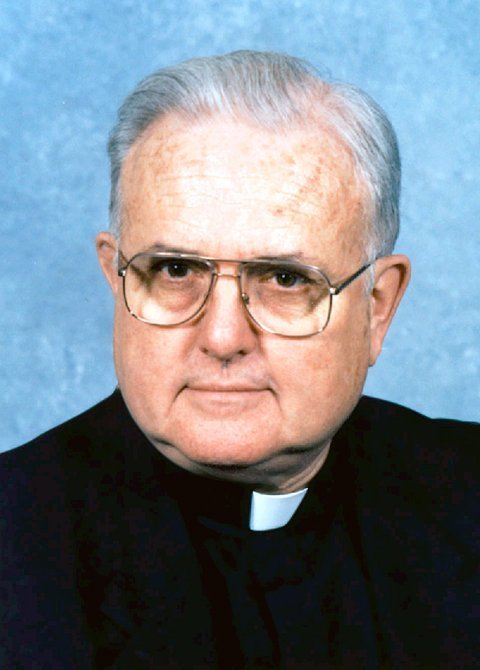 Father William J. Gordinier, whose 58-year priesthood in the Diocese of Rochester included a nearly 20-year pastorate at St. Mary Church in Geneseo, died May 12, 2016, at the Sisters of St. Joseph Motherhouse in Pittsford. He was 83 years old.

Father Gordinier was a native of Holy Rosary Parish in Rochester. He attended St. Andrew’s and St. Bernard’s seminaries and was ordained May 31, 1958, by Bishop James E. Kearney at Sacred Heart Cathedral.

In 1972 he became copastor of St. Joseph in Penfield, serving there until 1976, when he began a six-year pastorate at St. Patrick, Cato; St. Thomas, Red Creek; and St. Jude, Fair Haven.

In 1982 Father Gordinier commenced his long tenure in Geneseo, serving St. Mary Church until reaching senior-priest status in 2001. He also was temporary administrator of St. Agnes Church in Avon in 1990.

His pastorate was marked by the construction of a new parish center at St. Mary — as well as a personal touch that made him beloved among parishioners.

"He really knew how to work a room," said Cathy Meyer, religious-education coordinator and secretary at St. Luke Parish, of which St. Mary now is a part. She remarked that it was typical for Father Gordinier to arrive for a noon luncheon "and it would be 1 before he sat down, because he’d stop to say hi to so many people. He just knew everybody, and everybody loved talking to him. He was so sincere. We were really lucky to have him here for so long."

Father Thomas Statt, who was ordained along with Father Gordinier in 1958, called his classmate "a good friend of mine for the past 66 years" and echoed Meyer’s sentiment about the priest’s outgoing personality.

"Whenever and wherever he was present, people just gravitated to him. He was like a magnet, and he shared so many wonderful stories and anecdotes. You always left him smiling and feeling better about life," Father Statt said, adding that "Gordy loved his priestly vocation and he lived it well and happily for 58 years."

In addition to parish ministry, Father Gordinier served at various times on the diocesan Tribunal, as regional coordinator for Livingston County, as a member of the diocesan Presbyteral Council, as chaplain of the Rochester Fire Department and as diocesan director of the Junior Legion of Mary.

Upon becoming a senior priest, Father Gordinier relocated to Church of the Assumption in Fairport, where he assisted for several years before moving to the Sisters of St. Joseph Motherhouse.