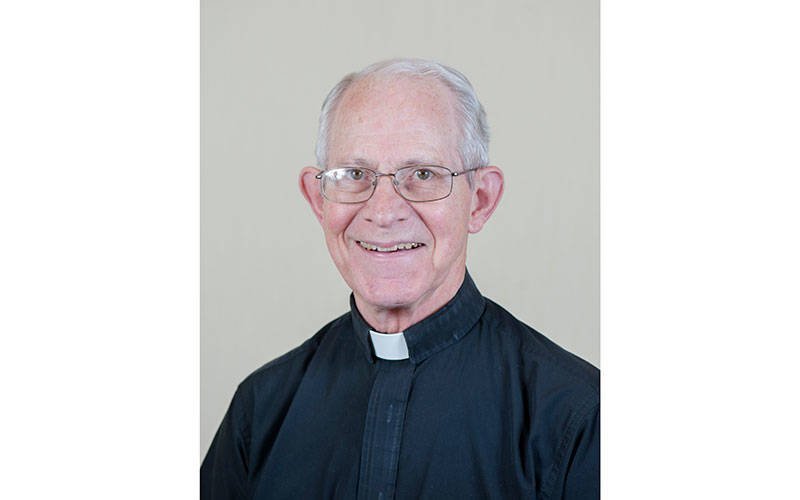 Father Winfried Kellner, who served in several diocesan parishes during his 58-year priesthood and was well-known for his chaplaincy ministry at Rochester-area health-care facilities, died Aug. 13, 2021, at the Sisters of St. Joseph Motherhouse in Pittsford after a long illness. He was 84 years old.

Father Kellner was a native of Bavaria, Germany. He and his large family moved to the United States when he was 12 years old. His home parish in the Rochester Diocese was St. Columba in Caledonia. He attended St. Andrew’s and St. Bernard’s seminaries and was ordained June 1, 1963, by Bishop James E. Kearney at Sacred Heart Cathedral.

Father James Lawlor, a senior priest in the Diocese of Rochester who was ordained along with Father Kellner, noted that his classmate was an excellent student — which worked to Father Lawlor’s benefit when they were chemistry-lab partners at St. Andrew’s Seminary.

“I always told Win I probably never would have gotten ordained without him,” Father Lawlor recalled with a laugh. “I knew nothing of chemistry, but Winfried came from a very scientific-oriented family.”

Father Kellner spent the following 13 years as chaplain at Monroe Community Hospital. He went on to become administrator at Our Lady of Victory/St. Joseph, Rochester, from 1996-2001. From 2001-07, he served concurrently as sacramental minister at Our Mother of Sorrows in Greece and part-time chaplain at Unity Health.

After reaching senior-priest status in 2007, Father Kellner continued to reside at Our Mother of Sorrows while also tending to several chaplaincies. In November 2016, he relocated to the Sisters of St. Joseph Motherhouse.

“He was a good, faith-filled, holy priest, and a wonderful chaplain,” said Father Alexander Bradshaw, a Diocese of Rochester senior priest, who resided with Father Kellner at Our Mother of Sorrows for most of his 12-year pastorate that concluded in 2012.

Regarding Father Kellner’s chaplaincy service, Father Bradshaw added, “He was devoted to the parties that he visited. They valued his ministry enormously; he was very, very caring and wonderfully compassionate to all he ministered to.”

In a 2013 Catholic Courier story, Father Kellner noted the importance he attached to being a chaplain: “I give encouragement to a lot of people who would be lost without that. You know that they’re hurting and need somebody to listen to them.”

Father Kellner was active in the Rochester chapter of the Kolping Society, an international Catholic organization with German roots. The priest also was known for celebrating Mass in German for special events at Rochester-area churches.

“He had a deep love for his mother country,” Father Bradshaw remarked.

In addition, Father Kellner served as chaplain of Knights of Columbus Archbishop Fulton J. Sheen Council 178 in Rochester and was an avid skier, tennis player and singer.

He is survived by his sisters, Sister Maria Kellner, SSJ, Maria Bors and Agnes Gebauer; brothers, Norbert and Benedikt Kellner; and many nephews, nieces, great-nephews and great-nieces.

Father Kellner’s funeral Mass will take place Aug. 19, 2021, at the Sisters of St. Joseph Motherhouse at 10 a.m., with Bishop Salvatore R. Matano presiding. Due to COVID-19 restrictions, the motherhouse will be closed to the public. However, the Mass will be livestreamed at youtube.com/catholiccourier.

Immediately after the Mass, the public is invited to attend a graveside service at Rochester’s Holy Sepulchre Cemetery (east entrance) in the priests’ section.