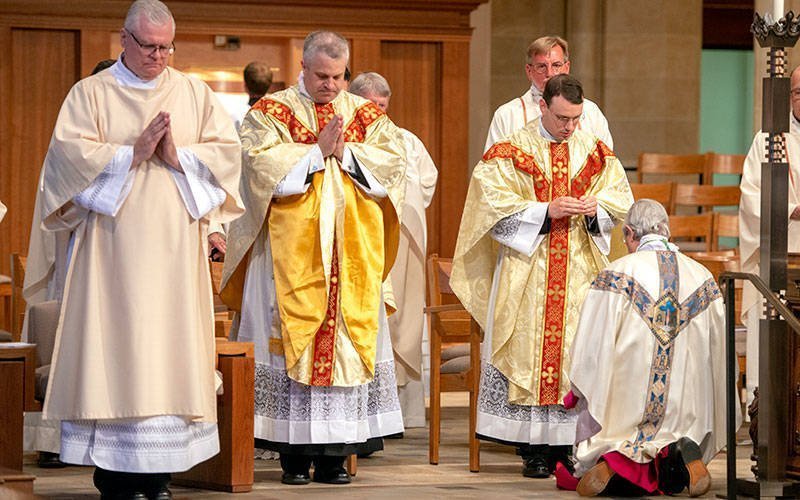 Two men ordained priests of the Diocese of Rochester

“This is a great joy for our diocese, and you know, we need it. We all need a touch of joy,” Bishop Matano remarked at the conclusion of the ordination Mass.

Moments later, the joy Bishop Matano spoke of was evident when the more than two dozen diocesan priests in attendance broke into spontaneous applause when Fathers Maurici and Lewis stepped from the cathedral’s nave and into the narthex, where the priests had gathered after the recessional.

Ordinations in the Rochester Diocese typically are well-attended by diocesan priests, who at one point participate in the ordination rite by laying their hands on the men being ordained. Last year, however, the ordination of Father Joseph Martuscello took place during a liturgy with only his family present, as state regulations due to the coronavirus pandemic severely limited the size of public gatherings at that time.

Those restrictions have since eased, and greater numbers of people attended the June 5 ordination of Fathers Maurici and Lewis, and more than 70 others watched the liturgy via the Catholic Courier’s livestream from the cathedral. The diocesan priests in attendance were able to lay hands on the heads of the elect. This was one of the most memorable moments of the ordination liturgy for Father Maurici.

“It’s such a powerful and moving symbol of the brotherhood of the presbyterate,” he said.

The ordination took place on the eve of the June 6 Solemnity of Corpus Christi, which honors the Most Holy Body and Blood of Christ.

“How very beautiful it is that you will celebrate your solemn Mass of Thanksgiving on the solemnity of Corpus Christi, the Body and Blood of Christ,” Bishop Matano said during his homily. “The heart of your priestly ministry finds its heart in the Eucharist. Here we receive the peace that only comes to us from Jesus.”

Father Maurici grew up attending Mass at St. Mary of the Assumption, now part of St. Martin de Porres Parish. He earned a bachelor’s degree from Mercyhurst College in Erie, Pa., and spent six years working in retail. In 2014, he entered Becket Hall, the diocesan pre-theology program for men discerning priestly vocations, and in 2015, he began studying at St. John’s Seminary in Boston, Mass. He was ordained a transitional deacon Aug. 15, 2019, along with his classmate, Father Lewis.

Father Lewis grew up attending Mass at Immaculate Conception Parish in Greene, which is in Chenango County and is a part of the Diocese of Syracuse. He came to Rochester in 1996 to study at the University of Rochester. After graduating from that University in 2000 with a bachelor’s degree in mathematics and computer science, he went on to earn a master’s degree in public administration from SUNY Brockport in 2006.

He worked in information technology at SUNY Brockport for 14 years before entering Becket Hall in 2014 and St. John’s Seminary in 2015. The Latin Mass community at St. Kateri Tekakwitha Parish in Irondequoit has been his spiritual home.

Father Lewis said he was looking forward to beginning his priestly ministry right away by offering his first Mass on the same day he was ordained.

“I’m privileged and humbled to serve the people of Rochester, and thank everyone for their prayers and beg for a continued remembrance in them as we go forward,” he said.