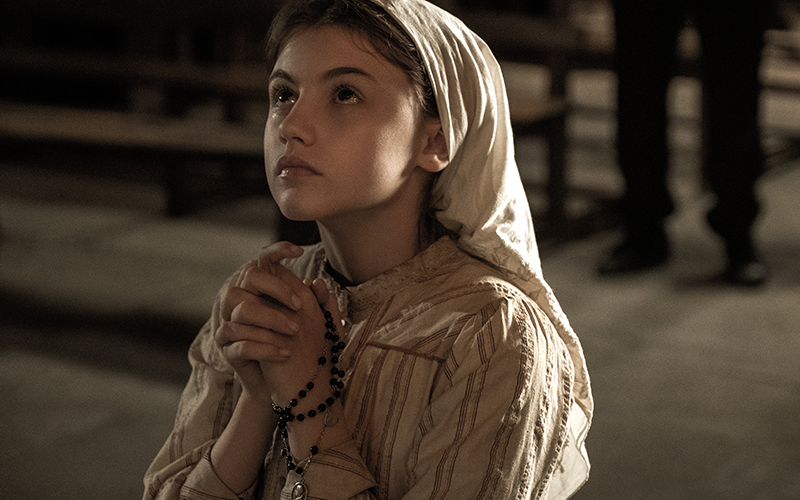 NEW YORK (CNS) — “Fatima” (Picturehouse), a fact-based drama from director and co-writer Marco Pontecorvo, recounts what may rank as the most remarkable series of religious events of modern times — namely, the 1917 apparitions of the Virgin Mary (Joana Ribeiro) to three shepherd children near the titular Portuguese city.

Despite a few flaws, believers will find Pontecorvo’s chronicle congenial fare that’s suitable for all but the youngest viewers.

The narrative is told in flashbacks during a 1980s interview fictional Professor Nichols (Harvey Keitel), a dyed-in-the-wool skeptic, conducts with the only one of the trio to have survived into adulthood, Carmelite Sister Lucia dos Santos (Sonia Braga). As the two spar over the reality of what Sister Lucia experienced, the scene shifts to the very different times of her childhood.

The screenplay, on which Pontecorvo collaborated with Valerio D’Annunzio and Barbara Nicolosi, emphasizes the World War I context in which Mary delivered her message of prayer and repentance as the path to peace.

Thus we see the young Lucia (Stephanie Gil) accompany her mother, Maria (Lucia Moniz), to a periodical public announcement by Fatima’s mayor, Arturo (Goran Visnjic), of local casualties in the global struggle. Though devout, Maria is consumed by anxiety over the fate of Lucia’s older brother, Manuel (Joao Arrais), who is serving with the Portuguese forces.

The other primary focus of the script is on the family and community conflicts that arose when news spread of Mary’s appearances to Lucia and her two younger cousins, Jacinta (Alejandra Howard) and Francisco (Jorge Lamelas). Initially, both Maria and the local parish priest, Father Ferreira (Joaquim De Almeida), are understandably doubtful and try to convince the kids to recant.

So, too, does Arturo. As an official of Portugal’s nascent First Republic, established in 1910, Arturo is charged with carrying out its anti-clerical and more broadly anti-religious policies. So alleged visits from the “Lady of the Rosary,” as Mary identified herself to Lucia and her companions, are the last thing he needs.

“Fatima” successfully portrays piety without yielding to sentimentality. But it fails to wrap up the loose ends of its story.

The justly celebrated “Miracle of the Sun” that occurred during Mary’s last appearance on Oct. 13 provides the movie with a spectacular built-in conclusion. Yet the gentle dispute between Sister Lucia and Professor Nichols is left hanging. We also do not get a sense of resolution about the strained relationships that prevailed before the children’s veracity was so strikingly vindicated.

This sense of incompleteness notwithstanding, “Fatima” is a welcome affirmation of faith in the midst of worldwide challenges to health and tranquility. Jacinta, aged 9, and Francisco, a year older, both perished in the influenza pandemic that began in 1918.

Sister Lucia, by contrast, lived a long life, dying in 2005 at 97. Her cousins were canonized on the centennial of the first Fatima apparition, May 13, 2017. The cause to raise her to the same status is currently active.

The film contains mature themes and bloodless images of combat violence. The Catholic News Service classification is A-II — adults and adolescents. The Motion Picture Association rating is PG-13 — parents strongly cautioned. Some material may be inappropriate for children under 13.