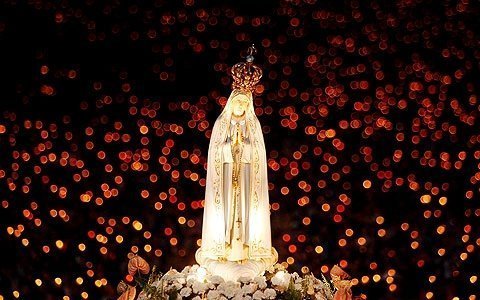 A statue of Our Lady of Fatima is carried during a candlelight vigil at the shrine in Fatima, Portugal, in 2007.

Anne Reyner of Parma said she has been touched by the message of Our Lady of Fatima, and it’s a message she wants to share with others.

Reyner, who attends St. Leo Parish in Hilton, will speak briefly and will show a video on Our Lady of Fatima at 6:30 p.m. Wednesday, Feb. 8, at St. Leo, 167 Lake Ave., Hilton. Reyner also will have brochures and other information about Fatima for attendees.

According to the World Apostolate of Fatima, three Portuguese shepherd children encountered an angel in 1916. In 1917, they were visited by Our Lady of Fatima, who called all of humanity to conversion, to pray the rosary and to practice reparation for the sins of humanity, including war. Two of the children, who died at young ages, were beatified in 2000, and the third died in 2005 at 97.

"The vision of Fatima concerns above all the war waged by atheistic systems against the church and Christians, and it describes the immense suffering endured by the witnesses of the faith in the last century of the second millennium," Cardinal Angelo Sodano, then the Vatican’s Secretary of State, said at the end of a Mass in 2000 at Fatima.

According to the Vatican, the message of Fatima is considered a matter of private revelation, which is considered an aid to faith and is intended to lead people back to definitive public revelation.

Reyner said she believes the message given during the apparitions at Fatima has great relevance today.

"(Our Lady’s) devotion is being increased everywhere because of the situation in the world," she said.

The need for the Fatima message is shared by Reyner’s friend, Pat Weber of Albion, who lived in the town of Greece for more than 50 years. Weber said Our Lady of Fatima has been an important part of her life since she visited Fatima, Portugal, about 30 years ago. She said she has experienced miraculous instances in her own life, and she feels many people could benefit from learning about Fatima.

"We are living the Fatima message right now," she said.