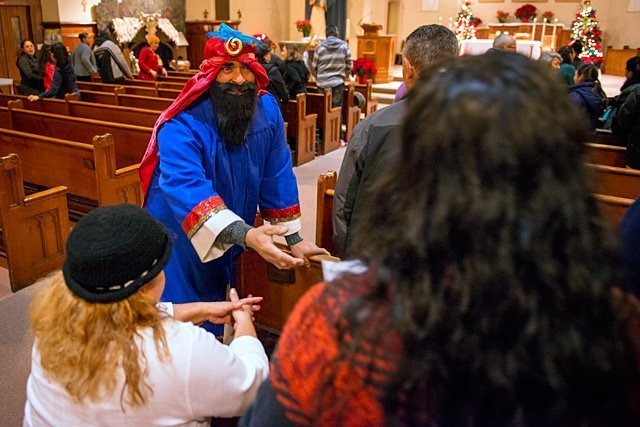 Portraying one of the Three Kings, Jesus Jiménez offers the sign of peace during the Feast of the Epiphany celebration at Rochester’s Holy Apostles Church Jan. 6. (Courier photo by Jeff Witherow)

ROCHESTER — Deacon Salvador Otero said the extreme cold may have kept people away from Holy Apostles’ annual celebration of Three Kings Day, but the tradition remains alive for many Latino families locally.

His family does exchange small gifts on Christmas Day, but the bigger celebration is on Three Kings Day, he said. His daughter had sent him pictures earlier that day of the stack of presents the Magi had delivered at her home in Georgia.

“We are used to giving presents … on Three Kings Day,” said Deacon Otero. “Santa Claus is a more American tradition.”

Most importantly, the kings remind the world of the gift of salvation that Jesus offers to the world, Deacon Otero said following the Jan. 6 Mass and gathering. The kings were powerful men and represented people of all races, and yet they paid homage and bowed before the baby Jesus, he added.

“They spent a lot of money and a lot of effort and they did that to come to see (Jesus),” Deacon Otero said. “They recognized the power of God.”

Deacon Otero noted that Holy Apostles would have back-to-back Epiphany celebrations this year, since the parish always celebrates the Mass for Three Kings Day on the Jan. 6 feast day and would be marking the Epiphany as per the liturgical calendar on Jan. 7-8, he added.

About 50 people attended the parish’s Jan. 6 Mass celebrated by Father Tony Mugavero. Jesús Jiménez, Salomón Montes-Deoca and José Luis Méndez portrayed the Three Kings. At the conclusion of the Mass, they presented bags of candy to parishioners during the recessional.

In his homily, Deacon Nemesion “Vellon” Martínez also noted the prominence of the Three Kings Day celebration for Hispanics worldwide. He said Holy Apostles stood in solidarity with all the grand celebrations that were taking place throughout Latin America.

“It’s a family day,” he said. “We get together with family to celebrate.”

The deacon said he also has fond memories of the feast day from his childhood in his native Puerto Rico. He recalled leaving out grass for the camels on which the Magi rode as they followed the star to Jesus and receiving presents, as well as the food and treats and just being with family.

“That day was for everyone,” he said.

To get a better understanding of the feast day’s spiritual meaning, though, Deacon Martínez said he decided to look up the definition of “epiphany” in the dictionary. The word is defined as apparition, manifestation, revelation, he said, and the definition helped him see that the Magi represent Jesus’ first encounter with the world.