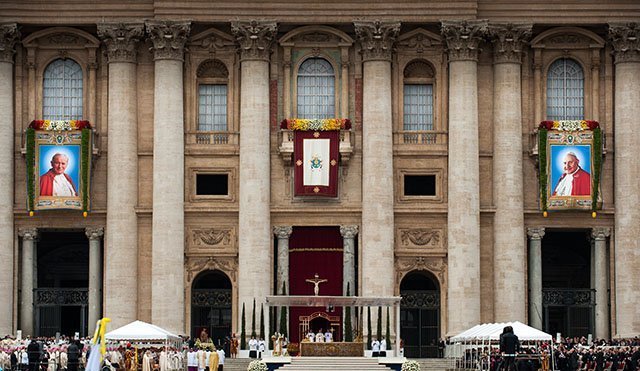 VATICAN CITY (CNS) — In light of "countless requests from every part of the world," Pope Francis has approved putting Sts. John Paul II and John XXIII on the church’s universal calendar of feast days.

Called the General Roman Calendar, it is the universal schedule of holy days and feast days for the Latin rite of the Catholic Church.

The two saints’ feast days, both of which have the ranking of an optional — not obligatory — memorial, are Oct. 11 for St. John XXIII and Oct. 22 for St. John Paul II.

The Vatican newspaper, L’Osservatore Romano, published the decree Sept. 11 from the Congregation for Divine Worship and the Sacraments.

The pope determines who makes the universal calendar based on recommendations from the congregation for worship.

In 2007, Pope Benedict approved stricter guidelines for determining which saints will be remembered with mandatory feast days. The new norms were necessary, the congregation had said, because the year does not have enough days to include all the saints in the universal calendar, particularly when Sundays and holy days are subtracted.

Pope Francis, who canonized the two saints in April, approved the optional memorials "given the extraordinary nature of these pontiffs in offering the clergy and the faithful a unique model of virtue and in promoting the life of Christ," the decree said.

"Taking into consideration the countless requests from every part of the world," the pope took "as his own the unanimous wishes of the people of God," it said.

Tags: Feast Days & Saints
Copyright © 2023 Catholic News Service, Inc. All rights reserved. Linking is encouraged, but republishing or redistributing, including by framing or similar means, without the publisher's prior written permission is prohibited.