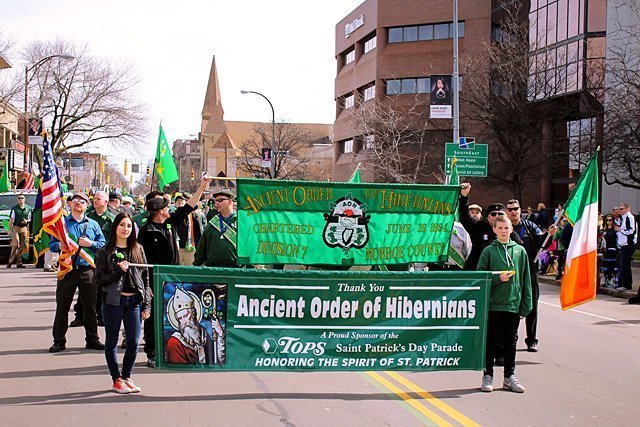 Members of the Ancient Order of Hibernians march down Rochester’s East Avenue in the St. Patrick’s Day parade March 12, 2016.

ROCHESTER — Preserving their cultures’ Catholic traditions for future generations is an important aim of those organizing age-old celebrations for the upcoming feasts of St. Patrick and St. Joseph.

Increased efforts at recruiting younger members has been a focus for the Ancient Order of Hibernians Colonel Patrick O’Rorke Division 7, which will march in Rochester’s annual St. Patrick’s Day Parade at noon on Saturday, March 11, following Mass at St. Mary’s Church Downtown.

The average age of newcomers to the 160-member Irish-American male fraternity is between 30 and 35, according to Jim O’Reilly, Division 7 president. In addition to promoting the Irish culture, these groups are active with volunteerism and fundraising for local charities. Division 7 is one of five Hibernian chapters in the diocese; Hibernian units typically have women’s divisions as well.

"Keeping the (Catholic) faith is a big tradition for us," said O’Reilly, who noted that the 9 a.m. Mass on March 11 — which he said is usually filled to capacity — stands in contrast to more secularized St. Patrick’s Day celebrations and carries deep meaning for Irish Catholics of all ages.

In addition to honoring the March 17 feast of St. Patrick, Ireland’s fifth-century patron saint, the liturgy also celebrates the Hibernian organization founded in New York City in 1836, O’Reilly noted. New chapters quickly sprang up in the United States as a response to anti-Catholicism during an era in which Irish immigration was increasing rapidly due to the potato famine in Ireland.

"People who came before us suffered a lot, and we like to honor them," said O’Reilly, a parishioner at St. Pius Tenth in Chili.

Food and prayer, meanwhile, are the chief components of festivities planned to mark the feast of St. Joseph, March 19.

The tradition of St. Joseph’s Tables originated in the Middle Ages when residents of Sicily, beset by a severe drought that was ruining their crops, prayed for the intervention of St. Joseph in his role as protector of families. When the rains finally came, natives showed their thanks by preparing a major feast in his honor. Italian immigrants brought the custom with them to the United States.

A vital facet of St. Joseph’s Tables is the feeling of community, said Nora Barrera, who with her husband, Fidel, is helping organize a table at Greece’s St. Lawrence Church on March 18.

People of all ages feel welcomed "because it’s family oriented," Barrera said, noting that more than 100 people are expected for the annual event, which will begins immediately after the 4 p.m. Mass.

She added that area businesses and fellow St. Lawrence parishioners donate considerable amounts of food, with the table open to the parish community as well as their family members and friends.

"It’s a party. It’s a party for St. Joseph," Barrera said with a laugh. "When the people come, it gives me pleasure."

St. Joseph’s Tables are presented at other diocesan parishes, Italian organizations and private homes on or near St. Joseph’s feast day. A typical event begins with prayer and the blessing of a makeshift altar, usually by a priest. Guests are treated to a wide array of dishes spread out on the table — all meatless because St. Joseph’s Day always falls during Lent.

Barrera noted the importance of making each St. Joseph’s Table successful so that they remain relevant well into the future.