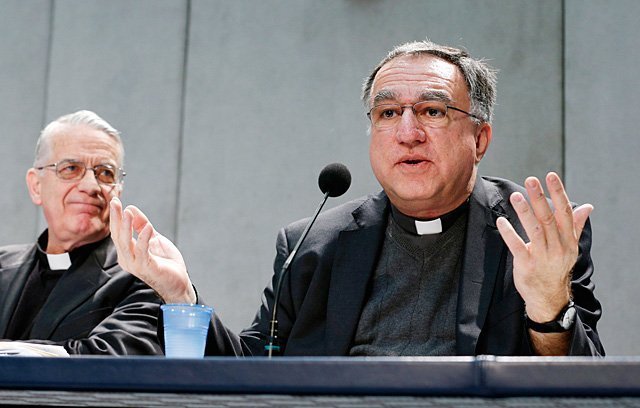 Pope Francis has captivated the entire world, but why does he do and say the things he does? What makes this popular pontiff tick?

Those are just a few of the questions Basilian Father Thomas Rosica will explore during a Feb. 19 lecture at Rochester’s Sacred Heart Cathedral. The Rochester native is uniquely qualified to answer these questions, as he has been serving as the English-language assistant to the Holy See Press Office since shortly after Pope Benedict XVI announced his resignation in February 2013.

The Catholic Courier and El Mensajero Católico newspapers scheduled Father Rosica’s lecture, "Catholic Communications in the Age of Pope Francis," as an inaugural lecture marking Catholic Press Month, which occurs each February. The talk, which is free and open to the public, begins at 6:30 p.m.

"With Pope Francis’ amazing presence throughout the media, our connection to Father Rosica presented a great opportunity to offer people a chance to learn how that all works and the amazing roller coaster ride it must be to work with the Holy Father. This pope is unscripted, and that’s a first," said Karen M. Franz, general manager and editor of the Courier and El Mensajero newspapers.

Father Rosica, who also is chief executive officer of Canada’s Salt + Light Catholic Television Network, will be able to share the valuable insights he’s gained while working with the pope and dealing with the international secular media, she said.

"There’s a certain celebrity aspect to Pope Francis that people are curious about, and I think the lecture will answer some of that curiosity," said Franz, who has known Father Rosica for many years. "But I think people will also come to better understand how Catholic communication tries to bridge the gap between what’s on the nightly news or some website or blog, and what was actually said, actually meant or what the context was."

In an e-mail interview, Father Rosica noted that Pope Francis repeatedly has said the goal of the Catholic Church’s communication efforts should be entering into dialogue with today’s men and women in order to appreciate their desires, doubts and hopes. Pope Francis sees the world as his parish, and demonstrates this view by the ease with which he communicates with his audiences, he added.

"This view of a world parish has been taken because Francis wants us to view ourselves as parishioners. This is not mere outreach for the sake of sentiment," Father Rosica explained. "It is Francis showing us the fruit of faith in a way that is tangible and imitable. His way of showing is straightforward and demonstrates how easy it is for parishes to be pockets of this marvelous work of illuminating faith around our dark, sad, despairing, violent, needy world."

The Feb. 19 lecture will not only be an opportunity for people to get a behind-the-scenes glimpse into the life of Pope Francis and his media presence, but also for the Courier and El Mensajero to increase public awareness of their own presences in the community, Franz said. The newspapers’ board of directors has been searching for ways to increase such awareness of the newspapers’ offerings, particularly in the business community, she said.

"In some cases we know people have old ideas of what we are about or that they are not that familiar with us to begin with," she explained. "This event will help us create more awareness of the Courier and El Mensajeroand highlight their missions."

"Sponsoring this lecture on Catholic communications in the Pope Francis era displays our commitment in bringing important topics, issues, helpful information and discussion to this community," said Greg Kamp, who is responsible for marketing of the cemeteries. Kamp, who has known Father Rosica for years, characterized him as "a dynamic speaker."

"Father Rosica was an eyewitness to history as Pope Benedict retired and Pope Francis was chosen to succeed him, and his insight will be very informative and enlightening," he said.