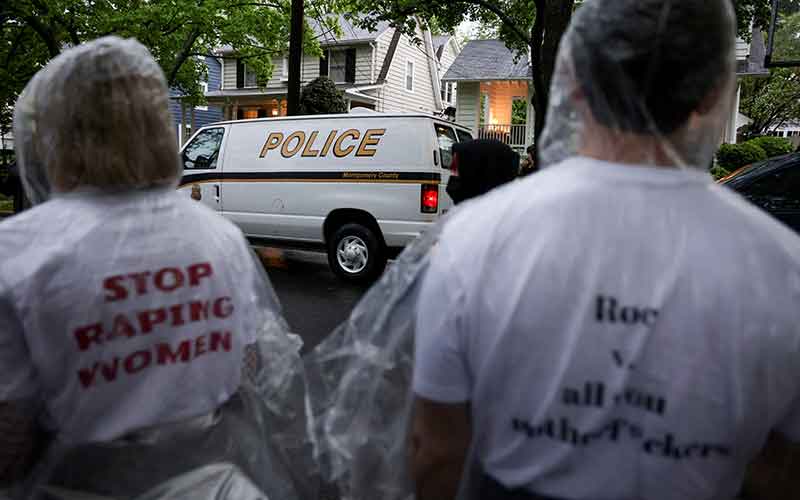 Abortion demonstrators protest outside of Supreme Court Justice Brett Kavanaugh's home in Chevy Chase, Md., May 7, 2022. A federal grand jury June 15 indicted Nicholas John Roske on a single count of attempted murder for planning to kill Kavanaugh. He was was carrying a gun, a knife and zip ties when he was arrested June 8 near the justice's home. (CNS photo by Evelyn Hockstein/Reuters)

WASHINGTON (CNS) — A federal grand jury June 15 indicted Nicholas John Roske, the man who had been found near the home of Supreme Court Justice Brett Kavanaugh a week earlier with a gun, knife and pepper spray, saying he planned to kill the justice.

The 26-year-old from California was charged in a single-count indictment with attempting to murder a justice of the United States.

Roske’s indictment in the U.S. District Court for the District of Maryland came the day after the House gave final approval to legislation allowing around-the-clock security protection for families of Supreme Court justices.

The measure was passed unanimously by the Senate in May but was held up by House Democrats who wanted the measure to also include protection for court employees’ families.

According to court papers, Roske arrived by taxi near Kavanaugh’s home in Chevy Chase, Maryland, shortly after 1 a.m. June 8 with a gun, pepper spray, a knife and burglary tools. Federal officials reported that Roske said he purchased the gun to kill Kavanaugh and also planned to kill himself.

Two U.S. Marshals — part of the security provided to the justices since the leak in May of a draft opinion on abortion — spotted Roske, but he was not apprehended until he called 911. He was arrested by Montgomery County, Maryland, police after giving a  dispatcher his location and saying he wanted to take his own life.

Roske was said to be upset by a leaked draft opinion suggesting the Supreme Court could overturn Roe v. Wade, the court’s 1973 decision which legalized abortion nationwide, in its highly anticipated ruling in an abortion case from Mississippi.

He also said he was upset about the school shooting in Uvalde, Texas, and thought Kavanaugh would vote to loosen gun control laws. The gun control comment is likely in reference to a current challenge awaiting a Supreme Court decision over New York’s permit requirement for carrying concealed guns.

“This kind of behavior is obviously behavior we will not tolerate,” Attorney General Merrick Garland told reporters June 8. “Threats of violence and actual violence against the justices of course strike at the heart of our democracy and we will do everything we can to prevent them and to hold people who do them accountable.”

Protests at the Supreme Court and near homes at some of the court’s conservative justices started taking place after the May 2 leak of the opinion in Dobbs v. Jackson Women’s Health Organization, a case about Mississippi’s ban on abortions after 15 weeks of pregnancy with the potential to also overturn Roe.

The draft opinion, written by Justice Samuel Alito, said Roe “was egregiously wrong from the start” and that “Roe and Casey must be overruled.” Casey v. Planned Parenthood is the 1992 decision that affirmed Roe.

Following initial protests about the draft, Garland announced May 18 that he was increasing security at the homes of all of the justices. A security fence also surrounds the Supreme Court building and nearby streets have been closed.

Alito’s draft opinion said the court’s 1973 Roe decision had exceptionally weak reasoning “and the decision has had damaging consequences.”

“Far from bringing about a national settlement of the abortion issue, Roe and Casey have enflamed debate and deepened division,” he added.

Politico’s report on the draft said Alito’s opinion was supported by Justices Clarence Thomas, Neil Gorsuch, Kavanaugh and Amy Coney Barrett and that Justices Stephen Breyer, Sonia Sotomayor and Elena Kagan were working on dissents. It was not clear how Chief Justice John Roberts planned to vote.

A Homeland Security Department report said the leak of the draft opinion has unleashed a wave of threats against officials and others and increased the likelihood of extremist violence.