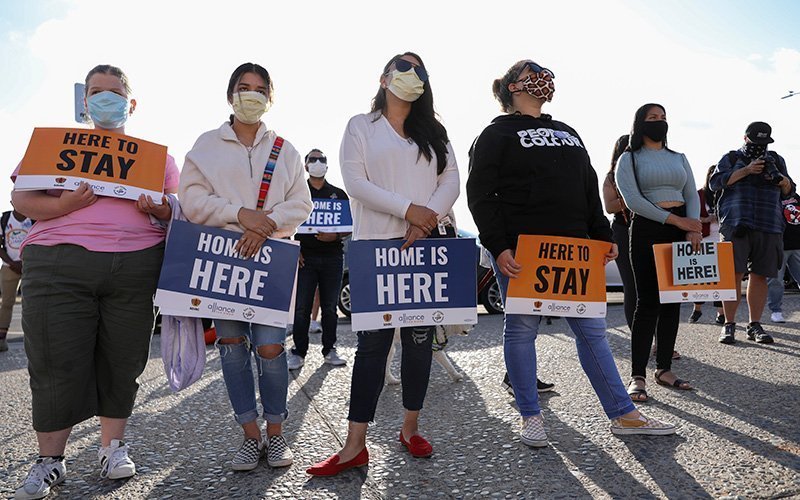 Demonstrators in San Diego rally in support of the Deferred Action for Childhood Arrivals program June 18, 2020. (CNS photo by Mike Blake, Reuters)
WASHINGTON (CNS) — A federal judge Dec. 4 said the Trump administration must fully restore the Deferred Action for Childhood Arrivals, or DACA, after the program that protects qualifying young adult immigrants from deportation was suspended this summer by Chad Wolf, acting Homeland Security secretary.
Judge Nicholas G. Garaufis of the U.S. District Court in Brooklyn, New York, said the program must be reopened for first-time applicants and the period of protection for DACA recipients must be reinstated to its initial two-year extension not one year, as Wolf’s memo specified.
“Great news to end the week!” tweeted Jill Marie Bussey, director of advocacy for Catholic Legal Immigration Network Inc., or CLINIC. She said her office would “monitor and advise” DACA recipients once they saw U.S. Citizenship and Immigration Services “comply with the posting requirements.”
Garaufis said the federal government had to post a public notice by Dec. 7 that new DACA applications were being accepted.
Other immigration advocacy groups similarly reacted on social media.
“This is a major victory for immigrant youth, led by immigrant youth,” tweeted the National Immigration Law Center. The group added that it looked “forward to working with the incoming Biden administration to create a permanent solution for immigrant youth and communities.”
And on a practical level, it urged “all eligible immigrant youth who hoped to file an initial DACA application to consult with an immigration attorney to consider filing as soon as possible.”
The judge’s ruling follows one he gave in November which said Wolf’s suspension of DACA was invalid because he did not legally hold his position when he issued the order.
In July, Wolf issued a memorandum rejecting first-time applications for DACA and limiting DACA renewals to one-year extensions instead of two. The memo drew criticism from immigrant advocates and Catholic officials. Leaders of the U.S. Conference of Catholic Bishops said they were “deeply disappointed” by it, and Bishop Jaime Soto of Sacramento, California, said it was “irresponsible and recalcitrant.”
The memo was issued more than a month after the Supreme Court ruled against efforts by the Trump administration to end DACA. President-elect Joe Biden said he plans to reinstate DACA and he also is expected to use executive orders to reverse other immigration policies of President Donald Trump.
DACA, a 2012 program President Barack Obama started by executive order, has enabled about 700,000 qualifying young people to work, go to college, get health insurance and a driver’s license and not face deportation. These young adults were brought to the U.S. as children by their parents without legal documentation.
Wolf had said the Trump administration may try to end DACA by looking at it as a law enforcement issue potentially contributing to illegal immigration. He also had described his action as a temporary change while the federal government reviewed next steps.
Karen Tumlin, a lawyer who represented a plaintiff in one of the lawsuits challenging Wolf’s order, tweeted Dec. 4 that the latest ruling essentially means: “The DACA program must return to how it was before the effort by the Trump administration’s effort to end the program on Sept. 5, 2017.”
The September date is when then-Attorney General Jeff Sessions announced DACA was “being rescinded” by the president, leaving its recipients in danger of losing work permits or deportation.
The biggest impact of Wolf’s memo would have been on new DACA applicants.
CLINIC attorneys have said about 60,000 young people now over age 15 would qualify for new DACA status, and the agency had been urging young people to get their paperwork together and seek legal advice about the program since the Supreme Court ruled in June that DACA would remain in place.
The program still faces other challenges, including a case in federal court in Texas, where Republican attorneys general have asked a judge to declare it unlawful. The Trump administration could also appeal the Dec. 4 ruling.
– – –
Follow Zimmermann on Twitter: @carolmaczim
Tags: Refugees
Copyright © 2022 Catholic News Service, Inc. All rights reserved. Linking is encouraged, but republishing or redistributing, including by framing or similar means, without the publisher's prior written permission is prohibited.