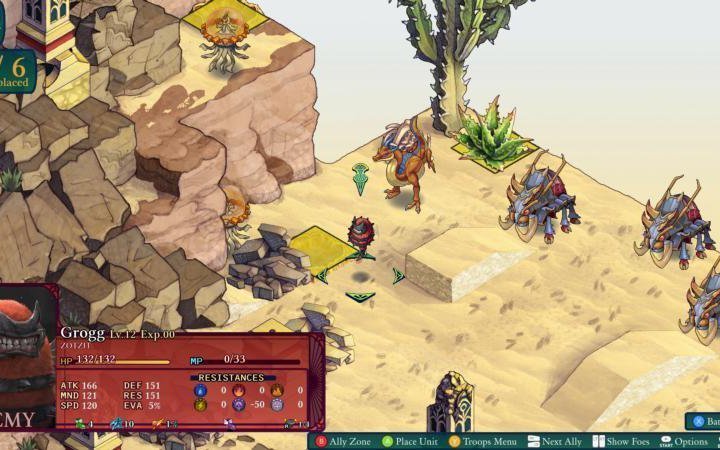 This is a scene from the video game "Fell Seal: Arbiter's Mark." (CNS photo by 1C Entertainment)

NEW YORK (CNS) — With villainy spreading across the mythical land of Teora, it’s up to one woman to rally her troops and save the world.

The game features an intriguing story involving honor, duty and selflessness. The restrained nature of its fantasy combat, moreover, makes it suitable for a wide swath of players.

According to the game’s lore, centuries ago, a terrible monster known as The Maw laid waste to the whole world. A small band of humans received incredible powers that helped them destroy the beast and, in doing so, they became known as the Immortals.

To protect the land from ever experiencing another such attack, they formed the Council of Immortals to ensure order and stability across the world. They also appointed warriors — called Arbiters — to enforce the law.

Players control Kyrie, who uncovers an evil plot within the ranks of her fellow Arbiters, many of whom have been corrupted by their power. Together with her band of friends, Kyrie travels across the land trying to defeat her adversaries and prevent another disaster like The Maw.

The shining moral elements within the plot derive from this fellowship’s self-sacrificial drive to do what’s right — even if it isn’t what’s easy. Kyrie faces unknown trials and seemingly insurmountable odds. But she values her oath to protect Teora more than her own comfort or safety.

Turn-based gameplay gives players plenty of time to strategize. Gamers can fully customize the team, exploring a wide variety of character classes, such as Knights or Templars, and making them their own. As characters gain experience in combat, they can be leveled up to unlock new abilities.

Battles involve using weapons and wizardry to fight against humans, monsters and otherworldly creatures. The magic is that of traditional fantasy, and not associated with any occult origin.

However, gamers face many different command menus to navigate in battle sequences. This can be frustrating for younger players or those who are new to turn-based strategy games. This fighting style can become tedious when facing large groups of enemies, all of whom have their own turn to act. While this particular aspect may be a drawback to some, it will at least be familiar, perhaps comfortingly so, to veterans of the genre.

Some of the female characters’ outfits are needlessly revealing, with bare midriffs and short shorts. But the pixelated art style makes this almost inconsequential. Additionally, there’s no vulgar language, nor any alcohol or drug use on display.

While the game can be said to flag at moments, the virtues it promotes make it wholesome and appealing. For those who enjoyed “Final Fantasy Tactics” 20 years ago — or for newcomers to the tactical genre — “Fell Seal: Arbiter’s Mark” represents a true retro pleasure.

The game contains frequent stylized violence with some blood effects and fantasy magic. The Catholic News Service classification is A-II — adults and adolescents. The Entertainment Software Rating Board rating is T — teen.