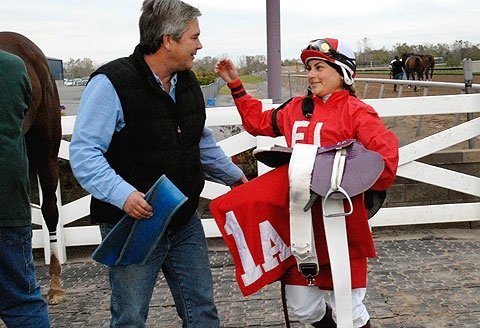 Jockey Elaine Castillo (right) and owner Waterford Stable congratulate each other after winning a race Oct. 18.

FARMINGTON — It was a storybook ending for one showdown at Finger Lakes Race Track last fall — the only female jockey on the only filly in the race beating all the boys, including her own fiancé.

But despite all the excitement, Elaine Castillo remained humble about the win on a cloudy but warm October day. She said her horse, named House on Toilsome, had been showing much improvement and she was pleased with the horse’s performance in only its second race.

"She’s been giving us everything we expected so far," Castillo said. "That’s awesome for me."

Castillo displays a very calm demeanor, which other owners at Finger Lakes say is an important characteristic for a jockey, explained Mike Foster of Phelps. He owns three horses, which Castillo has raced. He first met Castillo in 2004.

"As a jockey, being a (woman) she shows more compassion for the horse," added Foster. "You always see her petting the horse."

"You have a big advantage if the horse can relax; it will run a little better," added Castillo.

Horse trainer John Tebbutt added that Castillo has a way with horses. He first met the young jockey about six years ago when she was an apprentice rider. He noticed how well she did with the horses he trained, so Tebbutt continued using her more and more, he said.

"Horses like to run for her," Tebbutt remarked. "A lot of people just get up there and just, you know, start riding and whipping. She just sat there and waited for them to tell her what to do."

But the job takes a toll, so Tebbutt said that he was not surprised when Castillo, 30, took a break from racing last year. She said that she returned on a part-time basis earlier this year after doing a culinary internship in Italy.

Castillo said that coming out of the gate is one of the most dangerous moments for a jockey. Women tend to do well in those initial moments of a race because they treat the horses more gently than men, Tebbutt said. He said he has worked with about 10 female jockeys in his more than 30-year career in the field.

Castillo acknowledges that horse racing is still a male-dominated sport. She knows of more female jockeys racing in Philadelphia and Florida and is surprised that the numbers aren’t higher in this region where the women’s rights movement began.

"Men are always (physically) stronger," she said, then added with a smile: "But nobody is stronger than the horse. It’s about technique."

While there is a growing number of women who race horses, Castillo has been the most successful of the small pool of 12 female jockeys who have raced at Finger Lakes, noted Dave Mattice, a member of the track’s publicity department. Only last summer, she logged her 500th win at Finger Lakes, he said.

Castillo’s love of horses began in Mexico City, where she was born and first began jumping and riding show horses. When her parents divorced, she moved to Michigan as a young teenager with her mother to help care for her grandmother. Because her mother is not Mexican, Castillo grew up speaking English and Spanish so the transition to life in the United States wasn’t as difficult as it could have been, she said. Following high school, a new race track opened near her home and she decided to give racing a try. There, she trained for three years.

"You want to be sure you know what you’re doing," Castillo said. "My mom has a heart attack watching me race."

After Michigan, she began racing in Tampa during the winters and that is where she won her first race, Castillo remarked. At the Tampa Bay Downs, she also met Tebbutt for the first time as well as her fiancé, John Davila.

"Being a couple is not unusual (around the racetrack)," she added.

The couple hopes to eventually open a restaurant in Davila’s native Puerto Rico once they both retire. The lack of stability as a racing career is what led her to semi-retire from racing, Castillo explained. She loved her time in Italy and hopes to use the knowledge she gained there for her future endeavors, she added.

"It’s still my passion," Castillo said of horse racing. "I love to do it. … But there are so many things I love to do."