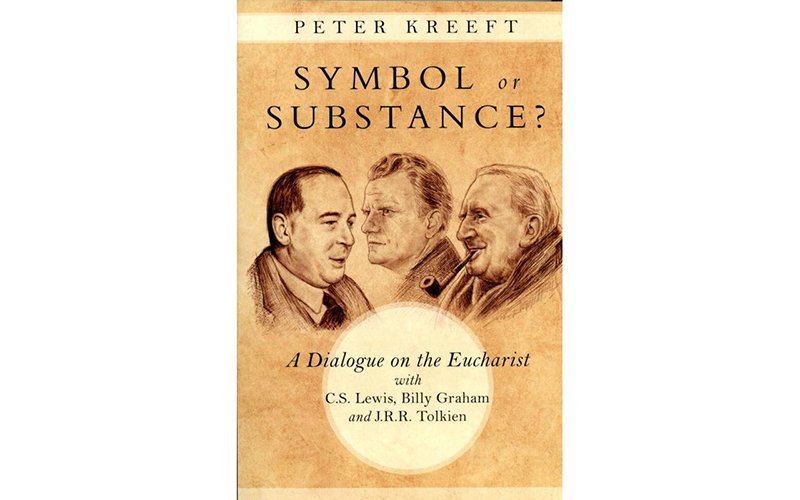 This is the cover of "Symbol or Substance? A Dialogue on the Eucharist with C.S. Lewis, Billy Graham and J.R.R. Tolkien" by Peter Kreeft. (Photo by CNS)

Peter Kreeft offers an accessible and believable portrayal of the two great English apologists, C.S. Lewis and J.R.R. Tolkien, in a fictional ecumenical conversation that includes the Rev. Billy Graham. The three (along with Rev. Graham’s imagined chauffeur, “Guy”) focus principally on the Eucharist. The dialogue format offers Kreeft, a philosophy professor at Boston College, the opportunity to make focused remarks on significant theological or philosophical issues without the usual scholarly structures of footnotes, theological and philosophical background, and literature reviews. Kreeft avoids confusion by keeping his characters more or less on target, with notable and interesting digressions.

Given its accessibility, a wide range of people will find “Symbol or Substance?” interesting. The accessible language does not prevent deeper reflection on the Reformation, the church fathers, the Eucharist and the nature of the church. The references to historically rooted tensions puts the book in the realist camp of ecumenical dialogue rather than in the peace-at-any-price one.

Kreeft has Lewis and Tolkien repeatedly bring up the fact that Protestantism didn’t come on the scene until rather late in Christian history. Would God have allowed Christians to follow an incorrect sacramental theology or understanding of the church for the first 1,500 years? Isn’t it Protestants who have a lot of justifying to do over their positions and practices? Kreeft never fully answers this question through the dialogue. In fact, he never endeavors to answer definitively any of the questions, as “Symbol or Substance?” seeks to explore rather than solve these divisions.

Kreeft depicts the Protestant side well. This includes Rev. Graham’s criticism of Catholic additions to the biblical faith: “We have no objection to the authority of the church when she defines the Bible. We have objections to the church when she defines new things, new dogmas.” Tolkien replies with the Catholic perspective: “But she (the church) doesn’t do that. She doesn’t define new things; she defines old things, when they’re denied by new heresies. Her dogmas are the things that she has always believed.”

The major theme and strongest part of the book centers around the Eucharist and whether it is a symbol or the actual body of Christ. Kreeft shows the dual materialist-spiritual Catholic view. Concerning Jesus’ institution of the Last Supper, he has Tolkien say: “Watch how carefully he chooses his words. He doesn’t say, ‘Take and eat this, but I don’t mean that literally. This bread is only a symbol of my body, and your eating it is only a symbol of your faith.’ That’s a really strained literary interpretation.” The Catholic position appears more biblical than the perspective attributed to Rev. Graham.

Helpfully, Kreeft presents the spectrum of teachings on the Eucharist, though some terms (consubstantiation) are better explained than others (transubstantiation). The thoughts of reformers such as Martin Luther, John Calvin and Huldrych Zwingli are presented. Kreeft describes the Anglican position as being neither Catholic nor Protestant regarding this issue and others.

Rev. Graham, which is to say the Protestant side, comes off as being overly spiritual, as the “sola fides” (“by faith alone”) concept seems in his view to disallow any involvement of the material world whatsoever in the practice of the faith. He is thus accused of being a Gnostic. The ancient Gnostics rivaled ancient Christians. They believed that only the spiritual was good, and thereby condemned the material world as evil. Rev. Graham seems to see almost all aspects of the faith in spiritual and symbolic terms, except for the Bible, which acts as his magisterium.

While Lewis and Tolkien go to great lengths to show the historical aspect of the faith, such as the sacraments being practiced since ancient times, Rev. Graham seems to be ahistorical, unconnected to anything other than his faith. One wonders whether all Protestants really practice the faith in this way. One shortcoming of not having a scholarly structure is that development of ideas cannot always be pursued so as to show the diversity of Protestant thinking on the role of faith in our salvation.

Catholic readers may feel vindicated, as Kreeft shows the close connection between the spiritual and the material. The spiritual can only work on humans through the material. This begins with Christ’s death and resurrection, which is a physical and historical event. The Eucharist’s physical reality stems from this physical beginning to the faith.

Welter has degrees in history and theology and teaches English in Taiwan.