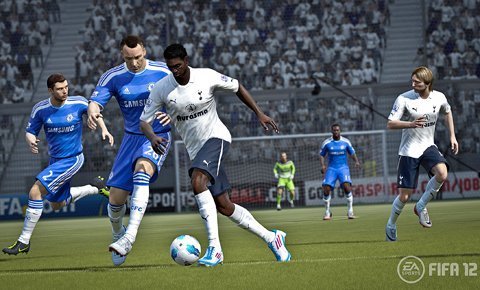 NEW YORK (CNS) — One complaint perhaps too easily lodged against "FIFA Soccer 12" (Electronic Arts) is that it seems to amount to little more than a minor upgrade over last year’s edition. That criticism has been leveled at almost every installment of the franchise since its 1993 inception.

Yet the fact remains that every year "FIFA" does get better, and "FIFA 12" — as played for review on the Xbox 360 — is no exception. A clear advance on "FIFA 11" in almost every respect, die-hard soccer enthusiasts will undoubtedly find enough in this latest offering to justify the outlay of a further $60. But will the same be true of more casual fans or, for that matter, of parents on a budget?

In answering that question, it’s probably best to begin by noting that the game engine has undergone some fundamental changes, the biggest of which are the new defending system, and the impact engine.

Previous generations of the title encouraged players to launch themselves unrealistically at oncoming opponents in possession of the ball, instead of tactically surrounding them and ushering them out of danger, as would be done on the field. EA has recognized this flaw, and consequently the system now rewards a more careful approach to defending. So veteran gamers trying to handle defense in the artificially aggressive way they used to will soon find themselves conceding a flurry of goals.

The impact engine is a subtly implemented feature by which the game takes more notice of players’ movements toward one another — thus it acts as the soccer equivalent of a collision engine. The result is that tackling now feels a good deal more realistic, as players on the receiving end of hearty take-downs go flying, and receive more lifelike injuries to boot.

These refinements may not sound particularly groundbreaking. And indeed, there really is nothing all that revolutionary about "FIFA Soccer 12" — EA prefers, apparently, to rely on a more studied and deliberate evolution of the franchise.

This can be seen in other aspects of the game. Career mode, for instance, remains largely the same, with the player managing one of the many teams available, buying and selling athletes, then competing through the season. As with previous versions, injuries must be managed and tactics selected. Yet the mode has been tweaked by the implementation of youth systems and slower transfer deadline days, the latter building to a climax at midnight, just as in real life.

New features include "Play for Your Club" where the gamer wins experience points that contribute to a virtual league, and teams are relegated or promoted accordingly week by week. Though hardly earth-shattering, this does adds a sense of increased incentive.

In other ways, though, "FIFA Soccer 12" risks insulting the gamer. The most egregious example of this concerns the Live Season and certain customizations through the Creation Center. On top of laying out the initial price of the game, a player wishing to operate some of these features will have to spend additional money through the console to access them. Recession-beleaguered parents especially will find this an unwelcome surprise.

It’s true that most games nowadays do have additional downloadable features that require further payment. Yet it remains an unusual — and troubling — innovation to have certain game modes within the retail version of "FIFA Soccer 12" denied to the gamer until yet more cash has been extracted.
Such imperfections notwithstanding, "FIFA Soccer 12" is undeniably the finest chapter yet of the best soccer franchise available. Even so, those with no more than a casual interest in the beautiful game, as well as those watching their wallets, may want to make do with their copy of last year’s edition — or convince Junior to do so.