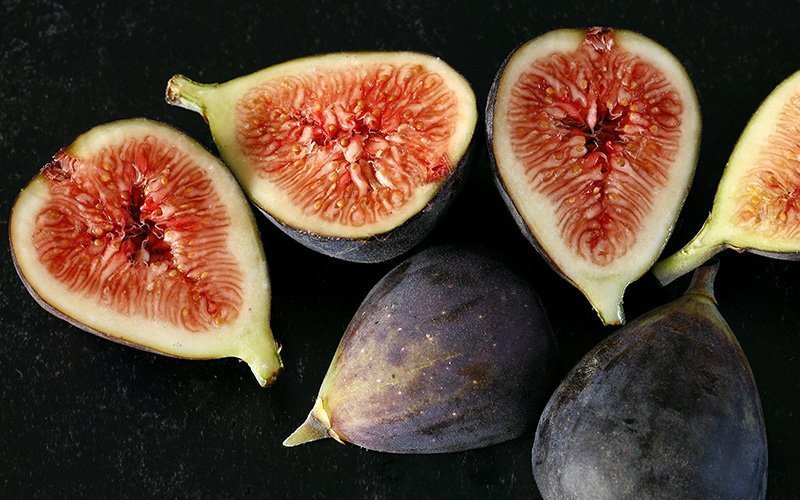 Fresh figs are pictured. The Bible presents figs and fig tree as symbols of security and prosperity. Figs came to North America in the 1700s with Spanish Franciscans, who grew fig trees at their missions in southern California. (CNS photo by Nancy Wiechec)

This is the first in a eight-part series called “Food from Scripture.”

Velvety soft on the outside with sweet crimson flesh within, the fig is a captivating food that makes its biblical debut in Genesis.

Could the fig have been the forbidden fruit Adam and Eve ate from the tree of the knowledge of good and evil?

According to biblical scholars, it may have been.

In the Hebrew Bible, the term “peri” is used for the forbidden hanging fruit. “Peri” simply means fruit, and ancient fruits included fig, pomegranate, apricot and other varieties.

St. Jerome used the Latin term “malus” in his translation. It’s an adjective meaning wicked or evil and a noun for apple or apple tree. The translation was a great play on a word and how the apple came to represent the forbidden fruit in the Garden of Eden.

Nevertheless, we know a fig tree was present in the garden. After Eve and Adam disobey the Lord by eating from the one tree they were asked not to, “they knew that they were naked; so they sewed fig leaves together and made loincloths for themselves” (Gn 3:7).

From that point on, the Old Testament presents the fig and fig tree as symbols of security and prosperity for the Israelites.

In the New Testament, budding and barren fig trees appear in parables and text on faith, life and renewal.

Widespread and abundant throughout the Mediterranean region, figs have been eaten fresh and dried for storage for thousands of years. Evidence shows that they were consumed by Spartans for quick energy.

The fig found its way to America with Spanish missionaries who brought the fruit to southern California in the 1700s. The variety became known as Mission figs, and the Golden State remains the top fig grower in North America.

Highly nutritious with significant amounts of vitamin B6, potassium, iron, fiber and calcium, figs are what we call today a superfood.

Because of their short shelf life, fresh figs were never eaten much by Americans. However, Fig Newtons, cookies made with fig paste and introduced in 1891, did become famous. Aside from that, figs remain somewhat of a gourmet item in the States.

Here is a fairly simple recipe for a satisfying main dish that uses dried figs as well as olives and olive oil, other prolific foods from Scripture.

Wisk together the first eight ingredients, then mix in the figs and olives. Place chicken in a large resealable plastic bag and pour in the marinade. Squeeze excess air from bag and seal. Gently massage the bag to distribute the marinade throughout the meat. Refrigerate overnight.

Heat oven to 375 F. On a sheet pan, arrange the chicken thighs in a single layer, skin side up. Pour the marinade with the figs and olives into the pan. Pour the wine around the chicken. Sprinkle a few pinches of salt over the pan.

Roast for about 40 minutes, or until the thighs register 165 F on a meat thermometer and the skin is nicely browned. Arrange chicken on a serving platter, pour over the pan juices with the figs and olives. Top with parsley.

Serve with a mixed greens salad and crusty bread for soaking up the pan juices.

(An online source for quality California dried figs is Valley Fig Growers, https://valleyfig.com. This dish above was adapted from a recipe by chef Daniela Gerson that appears on the Valley Fig Growers website.)