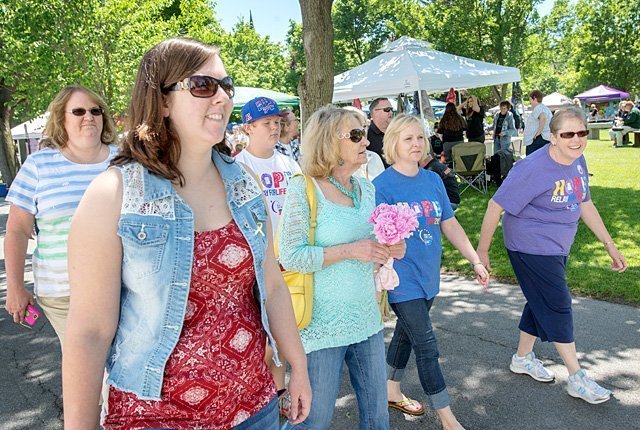 However, the relief surrounding these positive developments has been tempered by several other recent health crises in Sara Harvey’s family:

* Her brother, John Hise, had been diagnosed with lung cancer in October 2013. He died seven months later, after the cancer spread to his bones.

* Her brother-in-law, Gary Sims, was diagnosed with extensive small-cell lung cancer in February 2014 and died this past Jan. 12.

* Her father, Richard Hise, died suddenly last July 24 following a long decline in his health since suffering a stroke the previous Thanksgiving.

"One way or another, we can’t catch a break," remarked Elizabeth Sims, Gary’s daughter and Sara Harvey’s niece.

With cancer factoring into so many family circumstances, the Relay for Life on June 6 was a most appropriate setting for Harvey and Sims.

They, along with Harvey’s husband, Christopher, and Sims’ mother, Jacqueline, formed the relay team known as "For Father Gross with Love." The title honors Father Larry Gross, longtime pastor of St. Paul of the Cross in Honeoye Falls and St. Rose in Lima, who died last July 4 at age 73 after his own lengthy battle with a variety of cancers.

Completing the five-person relay squad was Sister Karen Dietz, SSJ, pastoral administrator of St. Paul and St. Rose as well as St. Agnes in Avon, a cluster in which the Harvey and Sims families are parishioners. Sister Dietz herself survived a bout with uterine cancer seven years ago.

Held on an unusually cool but brightly sunlit day in Honeoye Falls, the Relay for Life lasted from noon until midnight. Participants walked continuously around Harry Allen Park in the village’s center, where the annual relay has been held for more than a decade as part of a national fundraising and awareness effort by the American Cancer Society. Signs lined the park border encouraging women to get pap smears, men and women to get tested for colon cancer, parents to quit smoking, and so on.

Sara Harvey served as her relay team’s leader and was selected to speak during the opening ceremony.

"Through our greatest struggles we gain our strength," she told the gathering.

Following her short speech, the names of numerous cancer survivors were called out. Most were in attendance, and they came forward to receive sashes, then take the relay’s initial lap around the park. Other highlights of the day included themed races, music, dancing, prayer and the lighting of luminarias around the circle of the park at night.

"It’s like, you’re with people who get it. Not everybody does," Elizabeth Sims commented about the many people in her midst whose lives have been touched by cancer. "It’s very cool to come and be connected to this many people."

Members of the Father Gross with Love team alternated between selling mason jars and refreshments at a booth, and taking turns walking until past 10:30 p.m.

"It was a long day, and we were all exhausted," Sara Harvey remarked.

Exhausted, yet successful. With a fundraising goal of $1,500, the Father Gross squad more than doubled that amount and was among the highest fundraisers of all participants. Their efforts were a worthy tribute to Father Gross, who served as a Relay for Life coordinator during his pastorates at St. Paul of the Cross (1995-2010) and St. Rose (1999-2010; he retired in 2010). He also was involved in Kiwanis, Rotary, and ambulance and fire departments.

"He was a great guy, definitely missed. He was a strong force in the church and community. He always had a smile and a kind word to say," Christopher Harvey said.

"You know what I remember most about Father Gross? At the beginning of Mass he would say, ‘Have I told you lately that I love you?’" Sara Harvey said.

Father Gross spoke at the funeral of William Harvey Sr. in December 2013 and was already quite ill at the time.

"It was hard for him to talk," Sara recalled.

As his cancer worsened, the decision was made to name a team in his honor at last year’s Relay for Life — a gesture that was repeated this year.

Sister Dietz acknowledged that there was "a solace, a bit of emptiness" at the 2014 relay because it occurred only a month before Father Gross died. However, the prevailing atmosphere at that, and all other Relays for Life, has been upbeat.

"That’s really the focus. We are about hope," said Sister Dietz, who has been involved in the relays for several years.

"Some survive, some lose their battles. But we have to keep carrying on and save those we can," Jacqueline Sims added.