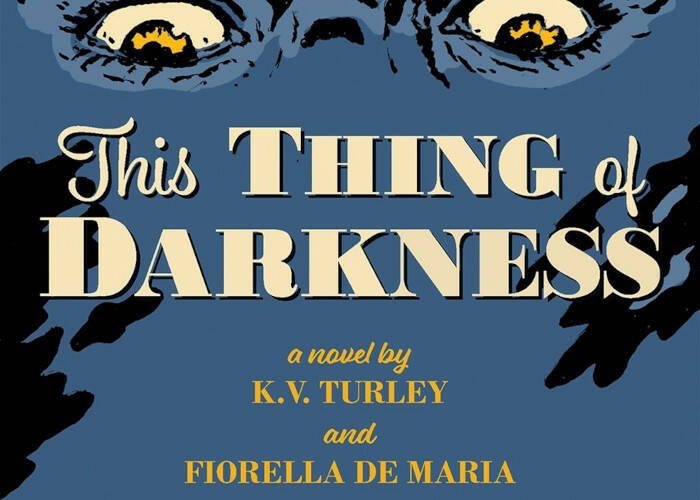 This is the book cover of This Thing of Darkness by K.V. Turley and Fiorella De Maria. (CNS photo courtesy of The Southern Cross)

SAN DIEGO (CNS) — Horror movie star Bela Lugosi is one of the main characters in This Thing of Darkness, a new book written by K.V. Turley and Fiorella De Maria.

While the film legend was a real person, the story itself is a work of fiction. Not only that, it is a supernatural horror novel infused with its coauthors’ Catholic faith.

“I have to say straightaway, this is not a biography,” De Maria said. “It is very much an alternate history.”

At the heart of the novel is a fictionalized version of Lugosi, who achieved stardom with the lead role in the 1931 film version of “Dracula” and followed that with a series of classic horror films throughout the 1930s and ’40s.

This Thing of Darkness is set in 1956, after Lugosi’s star had waned, his battle with drug addiction had become public and his career had been reduced to appearances in low-budget schlock.

In the novel, journalist Evangeline Kilhooley reluctantly accepts the assignment of interviewing the aging star, who re-“Counts” for her the story of his life.

“As the interviews progress, she starts to suspect that something is not quite right … and she gets drawn into this world, a dark world of Hollywood horror and her own demons start to emerge during the course of the book,” De Maria told The Southern Cross, San Diego’s archdiocesan newspaper, in a video interview.

Despite containing many accurate details about Lugosi’s filmography, the novel takes a sharp detour into fantasy territory. It asks readers to imagine what might have happened if Lugosi’s on-screen persona hadn’t been entirely an act, if the actor had dabbled in the occult offscreen as well, surrendering himself to the forces of preternatural evil and facing the spiritual consequences of such choices.

Of course, the authors aren’t alleging that anything of the kind actually happened.

“I’m very keen to point out this is an alternate history,” reiterated De Maria. “We’re not trying to tell the genuine story of Bela Lugosi.”

Reflecting on the possibility that readers might mistake the book’s fiction for fact, she acknowledged that she had “worried terribly” about including real people as characters. However, she noted that the real-life Lugosi was “a man who had all sorts of myths swirling around him, some of which I think he encouraged and certainly his agents encouraged.”

The haunting cover art for This Thing of Darkness depicts not only an illustration of Lugosi’s hypnotic eyes, but also a Miraculous Medal necklace, which is among the Catholic Church’s most popular sacramentals.

De Maria doesn’t consider herself to be a horror novelist, specializing instead in crime fiction and historical fiction. Her works include the Father Gabriel mystery series, which features a crime-solving Benedictine priest. She credits coauthor Turley, a longtime horror movie buff, with the idea for This Thing of Darkness.

This Thing of Darkness points not only to the existence of preternatural evil, but also to the Catholic belief that human beings are not left to confront it on their own. Rather, God and his angels and saints stand ready to fight with them. And, as the Bible promises, good triumphs over evil in the end.

For that reason, she explained, the novel provides readers with the opportunity to “explore the horror genre without fear.”

“It’s not a book without hope,” she said, “and I would say to anyone who has an interest — or who is nervous perhaps — about the horror genre, this might be the book for you.”

Grasska is assistant editor at The Southern Cross, newspaper of the Diocese of San Diego.