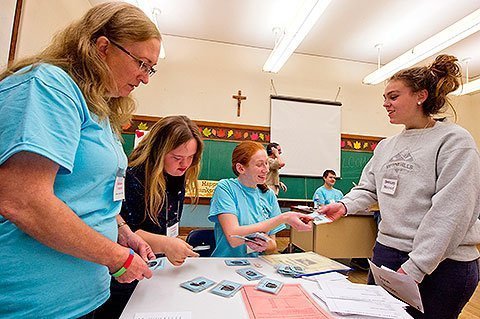 During the Diocesan Catholic Youth Conference in Elmira Nov. 10, Ruthanne Campbell (from left), Elizabeth Campbell, Shannon Dole and Brittany Mettrick take part in an economic exercise related to the subject of confronting hunger and poverty in the community.

ELMIRA — Earlier in his career, Gerry Straub used his filmmaking talents to entertain. These days, his productions aim to jar folks’ comfort zones — and in turn make them more attentive to the needs of the impoverished.

Straub made a sobering keynote presentation at the Diocesan Catholic Youth Conference Nov. 10, sharing scenes of despair that he has filmed in the poorest parts of the world. The footage included:

* A Peruvian boy dying of cancer, lying on a mat in a shabby, fly-infested hut that was his family’s home.

* A boy from El Salvador covered from head to toe with blisters — "the saddest person I have ever seen," Straub commented.

* A hospital overrun with undernourished youths in Uganda, where Straub claims there is one doctor for every 22,500 patients.

* Two small Ugandan children on the verge of death, laying outdoors on dusty ground. Their 9-year-old sister, who had walked 10 miles to get water, was attempting to bathe them.

* Naked children with bloated bellies, wandering among a sea of rubble left by the January 2010 earthquake in Haiti that killed more than 300,000 people.

"It’s very humbling, very eye-opening. You hear about these things all the time, but it’s different to really get into the reality of it," said Autumn Rose, 17.

Straub’s presentation underscored the conference’s theme on social justice and how Catholics are called to use their gifts to put their faith into action. Related activities during the day included workshops on such issues as hunger, poverty, homelessness and climate change; skits by teen presenters; and a "Gallery of Faith" where small groups rotated in silent prayer among several stations representing different facets of Catholic social teaching.

The conference was held at the Elmira Catholic Faith Formation Center and attracted approximately 65 participants. They listened intently as Straub described his transformation from being a major Hollywood producer who worked on "General Hospital" when the soap opera was at the peak of its popularity. Guided by a growing devotion to St. Francis of Assisi, Straub rediscovered his Catholic faith and began documenting the plight of the inner-city poor in such locales as Los Angeles and Philadelphia.

As the founder and president of Pax et Bonum Communications, Straub — a native of Brooklyn who now resides in Los Angeles — has expanded his concern about poverty to many parts of the globe, compiling 18 documentaries and writing six books. He has suffered from malaria and post-traumatic stress disorder, but said his faith guides him back to the places of greatest need.

He encouraged youth-conference participants to take time for daily prayer and to become involved in volunteerism. Autumn Rose, for one, said Straub’s 90-minute presentation incited her to do more and that she was not alone in that regard.

"I think pretty much everybody in the room felt that way," she said.

Bridget Derraugh, 16, agreed that the impact of Straub’s message was "life-changing."

"I think it was a wake-up call, really," said Bridget, from Immaculate Conception Parish in Ithaca. She said the video not only upset her but "reminds me to not get caught up in so many little issues" in her daily life: "We need to be more thankful for every gift we have."

The Nov. 10 keynote was one of three weekend appearances by Straub; he also made a public presentation Nov 9 at Elmira’s faith-formation center (the former Holy Family Middle School) and keynoted another diocesan youth conference held at Rochester’s Aquinas Institute Nov. 11. Donations were raised during both youth conferences to benefit Straub’s foundation as well as victims of Hurricane Sandy. In addition, both those events were attended by Bishop Emeritus Matthew H. Clark, who celebrated evening Mass at each venue.

This marked the first time that the diocesan youth conference, for grades 9-12, was offered in two locations; it formerly was held in or near Rochester only. Linda Mehlenbacher, diocesan youth-ministry coordinator, said the change was made to enhance regional accessibility — and indeed, many Southern Tier parishes were represented at the Nov. 10 event.

Autumn Rose, who attends Blessed Sacrament Parish in Elmira, said she’s glad that the diocesan conference took place in her neck of the woods.

"I love doing faith-related things as a group. It’s always energizing," she said.