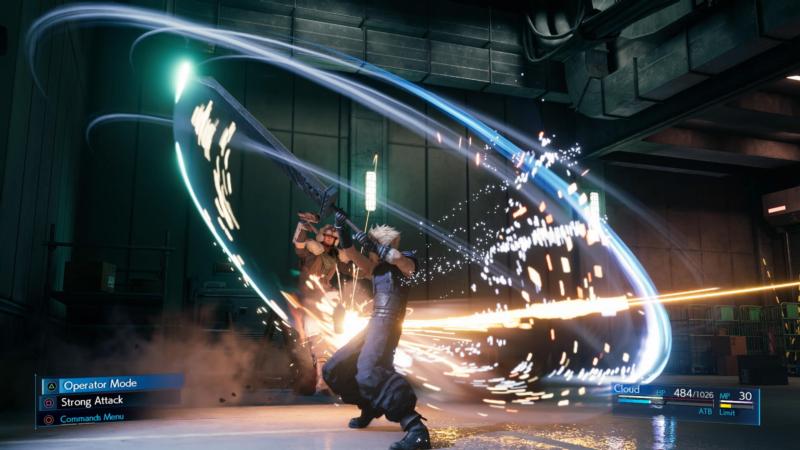 This is a scene from the video game "Final Fantasy VII Remake." (CNS photo by Square Enix)

The current title is more than a standard remake, however. Rather, it’s a complete overhaul and expansion that provides an experience even better than that supplied by its popular predecessors.

Given the challenging topics raised by the plot and the vulgarity into which the dialogue sometimes slips, however, this is best suited to adults or possibly older teens. Parents are advised to exercise caution.

The story revolves around Shinra, a corporation that’s harvesting the life force, called Mako, of the game’s stand-in for Earth and converting it into energy to power the mega-city of Midgar. The planet is dying as a result of their greed.

The game opens with a group of eco-terrorists who call themselves Avalanche leading a raid on a Shinra power plant as part of their campaign to save their world. A former soldier, Cloud Strife (voice of Cody Christian), has been hired to assist them.

Cloud starts his journey as a sardonic and coldhearted mercenary. He doesn’t care why Avalanche wants to bring down Shinra so long as they pay him. Beneath his detachment, however, is a multifaceted personality that players will slowly see revealed. As events begin to spiral out of hand, Cloud must also contend with a troubling figure from his past, an old war hero, Sephiroth (voice of Tyler Hoechlin).

Gamers predominantly control Cloud, although it is possible to switch to other identities, such as long-range machine gun-toting Barrett (voice of John Eric Bentley) and nimble fighter Tifa (voice of Britt Baron).

The original score was by famed composer Nobuo Uematsu, who worked on many of the franchise’s projects. The new soundtrack, by Mitsuto Suzuki, features a modern, dynamic approach. In fact, the music alone is worth checking out even for those with no interest in the game itself.

Avalanche’s use of force is complicated by Shinra’s counterstrategy. After the former plant a bomb in one of Shinra’s reactors, the company deliberately makes the explosion even more damaging than it would have been in order to exaggerate the threat their opponents pose.

Though the radical ecologists are themselves taken in by this ruse, and grapple with the guilt it entails, they are not, in the end, deterred by it but instead persist in their commitment to violent means. They calculate that the goal of saving their home world is worth the loss of some casualties.

Gamers well-grounded in their faith will immediately recognize that this moral math doesn’t add up from a Christian perspective. As the Catechism of the Catholic Church teaches us, good intentions can never justify an intrinsically disordered act, such as harming civilians or taking innocent life.

Thus parents who decide to allow older adolescents to play “Final Fantasy VII Remake” may want to use the struggle between Avalanche and Shinra as the starting point for a family discussion about the ethical balance between ends and means. Such a talk might also touch on just-war theory and explore in what circumstances force can be legitimately employed and by whom.

In purely economic terms, remakes are often seen as little more than a cash grab. With its nearly 40 hours of content to keep players entertained, though, this example constitutes an enjoyable tribute to a beloved classic, one that honors the past while building for an even more ambitious future.