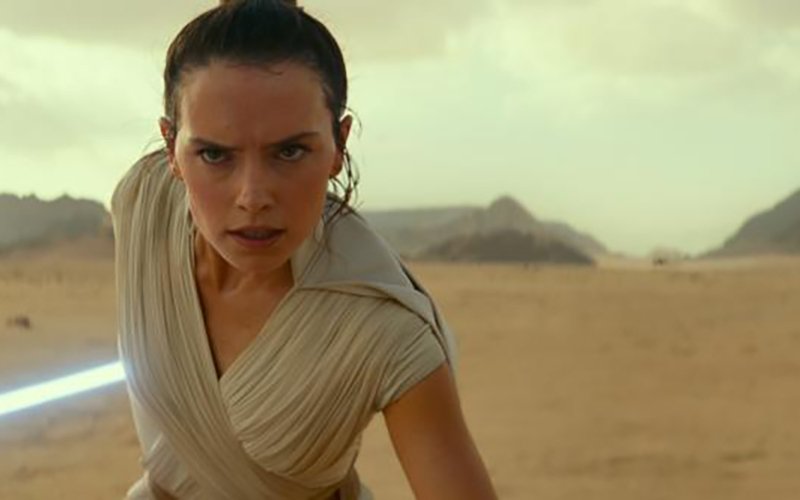 Daisy Ridley stars in the movie "Star Wars: The Rise of Skywalker." (CNS photo by Disney)

NEW YORK (CNS) — A long time ago, in a world that now seems far, far away — to wit, Earth in spring 1977 — George Lucas wowed audiences with the original “Star Wars” film.

More than four decades later, the ninth, and officially final, installment in the main body of the blockbuster franchise, “Star Wars: The Rise of Skywalker” (Disney), premieres.

Although it feels less substantive than the previous chapter, released in 2017, director and co-writer (with Chris Terrio) J.J. Abrams’ sci-fi epic certainly has spectacle to spare as well as some touching moments. Given that the battles that play out in this portion of the saga are spiritual as well as physical, moreover, viewers of faith will have much to ponder.

With the evil First Order rebranding themselves the Final Order as they prepare to launch a vast space fleet capable of crushing all opposition, General Leia (the late Carrie Fisher), commander of the Resistance, dispatches her ablest follower, Rey (Daisy Ridley), to locate the enemy’s secret base.

Rey is aided by ex-stormtrooper-turned-Resistance-fighter Finn (John Boyega) and by hotshot pilot Poe (Oscar Isaac). But Kylo Ren (Adam Driver), now the Order’s supreme leader, is convinced that he can draw Rey over to the Dark Side to which he, once the good Ben Solo, long ago surrendered himself.

The status of Lucas’ trademark Force remains ambivalent from a Christian perspective. But lessons about making moral choices, the need to reject temptation and the power of forgiveness and redemption are clear. So, too, is the message that ancestry does not determine moral destiny — just ask Luke Skywalker.

A couple of not-very-bloody wounds aside, the violence is kept nongraphic and the dialogue is mostly on the up-and-up, though the presence of some Jedi jingoism is one of the script’s minor flaws. This being a 2019 Hollywood movie, however, someone felt the need to include, in a moment of general celebration, a gal-to-gal smooch possibly suggesting a lesbian relationship between two of the extras.

Blink and you’ll miss that moment, though. So parents not wanting to be seen as latter-day Darth Vaders in the eyes of their teens may give way without much worry.

The film contains much stylized combat violence with minimal gore, a same-sex kiss, a couple of mild oaths and at least one crass term. The Catholic News Service classification is A-III — adults. The Motion Picture Association rating is PG-13 — parents strongly cautioned. Some material may be inappropriate for children under 13.