‘Finally,’ pope says he will be able to make pilgrimage to Iraq - Catholic Courier 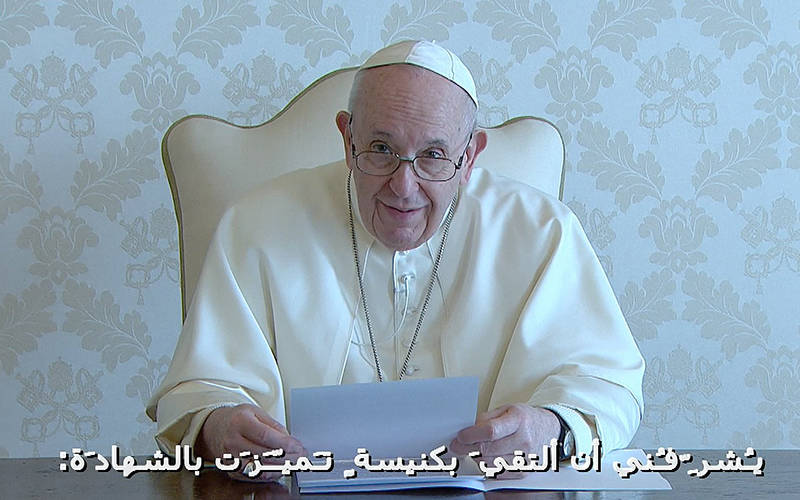 Pope Francis is pictured in a video screenshot delivering a message to the people of Iraq in advance of his March 5-8 visit. Pope Francis said he will visit as a pilgrim of peace and reconciliation, hoping to strengthen a sense of fraternity among all the nation’s people of every ethnicity and religion. (CNS screenshot by Vatican Media)

VATICAN CITY (CNS) — Pope Francis told the people of Iraq he was going to their country as a “penitential pilgrim,” asking God’s forgiveness for years of war, persecution and destruction, and as a “pilgrim of peace,” hoping to remind people that they are all brothers and sisters no matter their ethnic or religious identity.

“I will finally be among you,” he said in a video message, released by the Vatican March 4, the day before the trip was to begin.

“I come as a pilgrim, as a penitential pilgrim to implore forgiveness and reconciliation from the Lord after years of war and terrorism, to ask God for consolation for hearts and healing for wounds,” the pope said. “And I come among you as a pilgrim of peace, to repeat: ‘You are all brothers and sisters.’”

His March 5-8 pilgrimage of peace, he said, would aim to strengthen a sense of fraternity, “animated by the desire to pray together and to walk together, including with brothers and sisters of other religious traditions,” under the gaze of Abraham, who was born in Iraq and is recognized as patriarch by Jews, Christians and Muslims.

Speaking directly to the nation’s dwindling Christian population, which has suffered discrimination and persecution over the past two decades, Pope Francis praised them for bearing “witness to faith in Jesus in the midst of the most difficult trials.”

“I am honored to meet a martyred church,” he said. “May the many, too many, martyrs you have known help us to persevere in the humble strength of love.”

Still, he told them, “go forward” and do not allow the pain of the past to destroy hope and trust in God.

Pope Francis said that throughout the years of war and the reign of terror of the Islamic State militants, he thought often of the Iraqi people, especially the Christians, Muslims and Yazidis who suffered so much.

“Now I come to your blessed and wounded land as a pilgrim of hope,” he said.

Pointing to the story of Jonah — recognized as a prophet by Jews, Christians and Muslims — and Nineveh, an ancient city in what is now Iraq, Pope Francis contrasted the threatened destruction with the hope that came from the people turning to God.

“Let us be infected by this hope, which encourages us to rebuild and begin again,” the pope said. “And in these hard times of pandemic, let us help each other to strengthen fraternity, to build together a future of peace — together, brothers and sisters of every religious tradition.”

The post ‘Finally,’ pope says he will be able to make pilgrimage to Iraq appeared first on Catholic News Service.